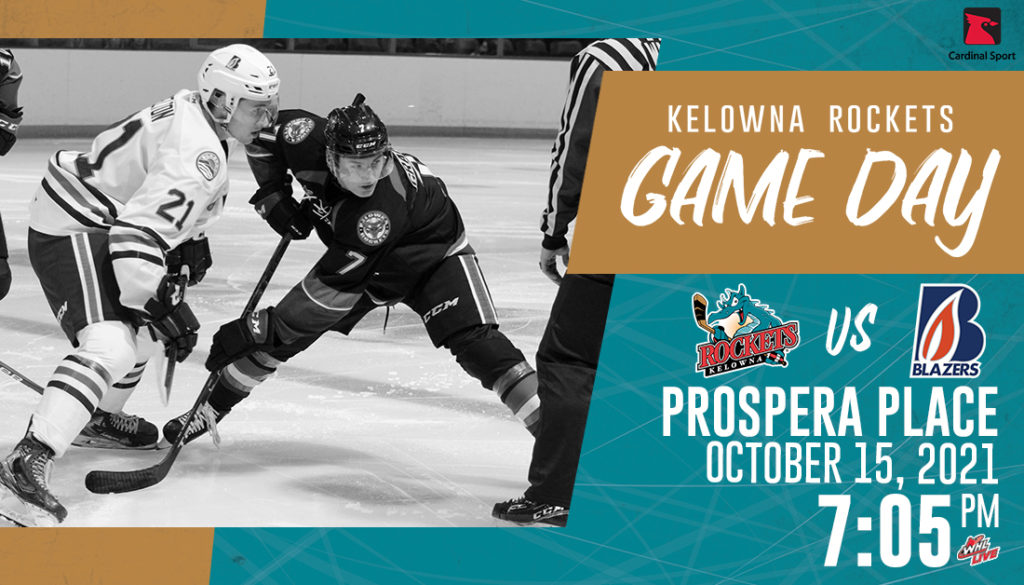 The Kelowna Rockets will be looking to string together a pair of wins when they open the home portion of their schedule against the Kamloops Blazers tomorrow night at Prospera Place.

The Rockets split their doubleheader in Victoria against the Royals last weekend. They opened the season with a 6-3 loss last Friday but bounced back the next night with a 6-4 victory.

“I think the first game we were just getting together as a team and getting used to playing with each other,” said Rockets captain Tyson Feist about their opening game.

“I think we could’ve come out a little bit better in that first game and the guys realize that. We recouped for the second game and I think we played a good strong team game.”

The Blazers will put their four-game win streak on the line against the Rockets. Kamloops was last in action earlier this week, where they picked up a pair of wins over the Royals on the island. They downed the Royals 3-2 on Tuesday and 8-3 on Wednesday.

“Every game against Kamloops is a big game, so the guys are really excited,” said Feist.  “We’re going to play a good team game and get the W.”

Earlier this week Kelowna acquired Colby Knight from the Edmonton Oil Kings. The 6’3″, 190-pound netminder said that he’s excited to join the organization.

“I’m super excited to be a Rocket and have the opportunity to be a starting goalie and play those key minutes for my team,” said Knight.

“I’m excited to hopefully make my debut tomorrow. I’m just going to take it one shot at a time and keep it simple.”

The current B.C. Provincial Health Office restrictions allow for 50% capacity at Prospera Place. A limited number of single-game tickets for Friday’s game went on sale via Select Your Tickets on Thursday morning and sold out within a few hours.

Due to Covid-19 protocols, printed lineup sheets will not be available at games for fans this season. They can be accessed online in the game day guide that will be available to fans by 3:00 p.m.

The Papa John’s 1st Goal Contest returns this season. Tweet your pick for the Rockets first goalscorer on game days before puck drop using the hashtag #Rockets1stGoal for a chance to win a puck signed by that player and a pizza from Papa John’s*.

*pizza code only valid for BC locations

You can watch all Rockets games on WHL Live on CHL TV. More are details available by visiting watch.CHL.ca. As of Monday, CHL TV is now compatible with Roku.