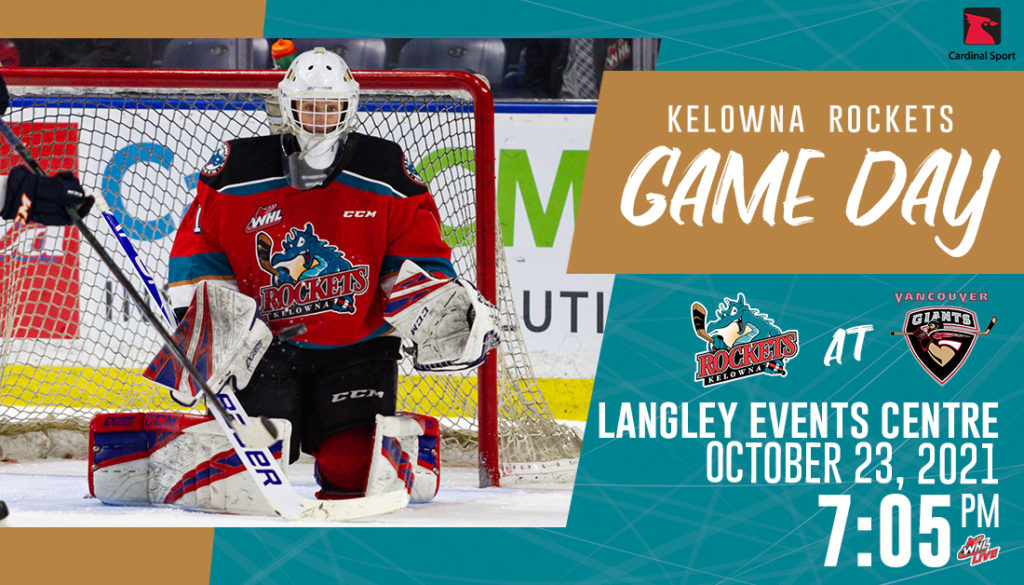 The Kelowna Rockets will be back in action this Saturday when they hit the ice to take on the Vancouver Giants at the Langley Events Centre.

After opening their season with a loss, the Rockets have now strung together a pair of wins. Most recently Kelowna downed the BC Division-leading Kamloops Blazers 4-2 last Friday in front of a sold-out crowd of 3,400 at Prospera Place. Goaltender Colby Knight made 29 saves in his debut, picking up his first win of the season. Chicago Blackhawks prospect Colton Dach picked up first start honours after posting a three-point (2G, 1A) night, including the game-winning goal.

Kelowna has made a handful of roster moves since the end of the preseason. The team acquired Colton Dach from the Saskatoon Blades in exchange for centre Trevor Wong on September 28. The team then made another trade to pick up goaltender Colby Knight from the Edmonton Oil Kings on October 12. The Rockets reassigned defenceman Will Irvine and goaltender Nicholas Cristiano and released overage netminder Cole Schwebius. On Friday, Ethan Ernst was dealt to the Tri-City Americans.

Vancouver enters Friday with the same 2-1-0-0 record as Kelowna. The Giants were last in action last Saturday against the Kamloops Blazers at home where they were shut out 5-0. Before they face the Rockets tomorrow, Vancouver will take on the Blazers again tonight at the Sandman Centre in Kamloops.

Following Saturday’s matchup, both teams will be off until next Friday night, where they’ll take each other on again at the Langley Events Centre.

Fans can watch all Rockets games on WHL Live on CHL TV. More are details available by visiting watch.CHL.ca.