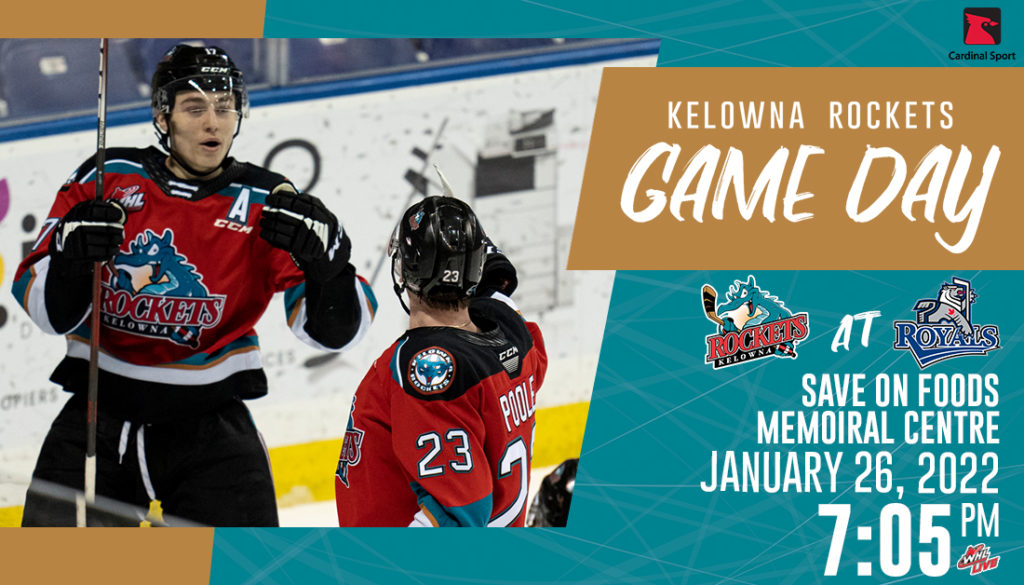 The Kelowna Rockets will resume their 2021-22 schedule with a pair of back-to-back games on the road against the Victoria Royals on Tuesday and Wednesday night.

The WHL announced last week the pausing of team activities for the Kelowna as a result of multiple players and staff being added to the WHL COVID-19 Protocol List due to exhibiting symptoms or having tested positive for COVID-19.

As a result of the pausing of team activities for the Rockets, last Friday’s road game versus the Everett Silvertips was rescheduled to Sunday, February 6. The road game scheduled for Saturday, January 22 against the Vancouver Giants has been postponed. An updated printable schedule can be found here.

Kelowna was last in action on January 14 and 15 when they hosted Victoria for a pair of games. The Rockets took both games, winning Friday’s matchup 6-4 and Saturday’s 9-1. Talyn Boyko started both games for the Rockets, his record is now 13-11-2-1.

Victoria last played on the weekend, hosting Vancouver and Everett. They fell 4-2 to the Giants on Friday and 5-3 to the Silvertips on Saturday.

Mark Liwiski will make his return to the Rockets lineup after serving a two-game suspension. John Babcock and Jake Lee are expected to be in the lineup after missing Kelowna’s last two games in Covid Protocol. Nolan Flamand remains out of the Rockets lineup for another two-to-four weeks with a lower-body injury. Goaltender Colby Knight is no longer on the Rockets active roster, he remains on the Rockets protected list. After being assigned to Junior A, he has returned home to Red Deer.

THE LAST TIME THESE TWO MET

The Kelowna Rockets exploded with a season-high nine goals in a 9-1 victory over the Victoria Royals on January 15th at Prospera Place. The following Rockets posted multi-point nights: Colton Dach (1G, 3A), Adam Kydd (2G, 1A), Jake Poole (1 G, 4A), Tyson Feist (2A) and Pavel Novak (2G, 1A). Marcus Pacheco found the back of the net for the first time in his WHL career. Talyn Boyko made 22 saves on 23 shots to pick up his 13th win of the season.

as of Monday afternoon

You can watch all Rockets games on WHL Live on CHL TV. More are details available by visiting watch.CHL.ca.

The next Rockets home game is this Saturday, January 29 against the Vancouver Giants. Fans can purchase their tickets online at selectyourtickets.com, at the Prospera Place box office or by phone at 250-762-5050. The box office is open 11:00 a.m. to 4:00p.m. Tuesday through Friday, and opens at 1:00 p.m. on Saturday home game days.

All fans attending Rockets games will need to abide by the BC Provincial Health Authority, Prospera Place and the Western Hockey League‘s COVID-19 health and safety requirements which includes masks, double vaccination and their vaccine card.