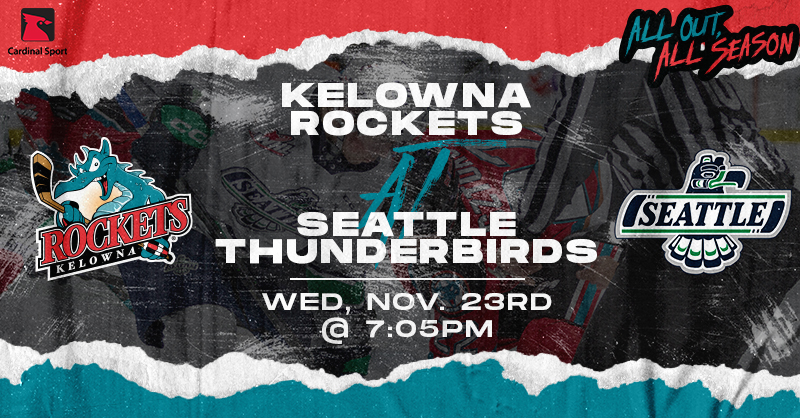 The Kelowna Rockets will be looking to string together three consecutive wins for the first time this season when they face the high-flying Seattle Thunderbirds.

The Rockets are coming off back-to-back wins at Prospera Place on the weekend, downing the Spokane Chiefs 10-3 on Friday and the Tri-City Americans 5-3 on Saturday. While the Rockets offence was in high gear all weekend, the penalty kill was busy as well, shutting down seven of the eight attempts Spokane had and all six Tri-City man advantages.

“The discipline aspect of things is something that we’ve definitely got to make sure that we get under control,” said Rockets head coach Kris Mallette. “There’s a lot of positives out of Saturday’s game that we’ll be able to watch on video and go over as a group, just to try and reinforce that same mentality and clean up some of those areas that we need to work on.”

With a record of 13-3-1-0, Seattle currently sits second in both the US Division and Western Conference standings. They moved up one spot to the fifth position in the Week 8 edition of the Kia CHL Top-10 Rankings released on Tuesday.

Seattle only played one game last week, coming away with a 2-1 overtime win over the Everett Silvertips on Saturday night at the accesso ShoWare Center in Kent, WA.

In their first meeting since the T-Birds eliminated the Rockets in the first round of the 2022 playoffs, Seattle handed Kelowna a 5-4 loss on October 7th at Prospera Place.

Andrew Cristall earned the game’s first star after scoring the first two goals of the game and adding an assist, Jari Kykkanen made 36 saves on 41 shots. Edmonton Oilers 2022 first-round pick Reid Schaefer led the Thunderbirds offence with a pair of goals, while goaltender Thomas Milic turned aside 32 of the 38 shots the Rockets fired at him.

The Rockets will be without Colton Dach, he will serve a one-game suspension for the check to the head major and game misconduct he received against Tri-City on Saturday.

Rookie forward Logan Peskett has missed the last two games with a lower-body injury, he was listed on Tuesday’s injury report as day-to-day.

Series at a glance

All Rockets games will be available on WHL Live on CHL TV.  WHL Live on CHL TV is available to fans anywhere in the world, providing high-quality streaming of WHL games on Apple TV, Roku, and Amazon Fire TV platforms, via mobile with iOS and Android, and on web using Safari or Google Chrome web browsers. Visit watch.chl.ca for complete details and subscription options.