Preview: Rockets ready to open 2022-23 season against Portland on Saturday 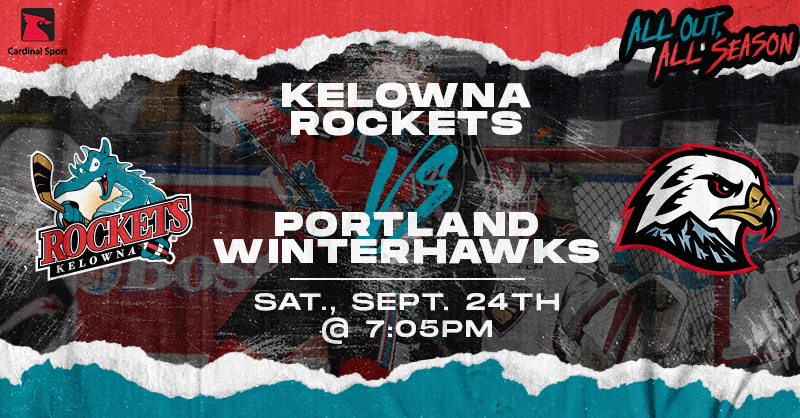 The Kelowna Rockets will kick off their 2022-23 regular season on Saturday night when they host the Portland Winterhawks at Prospera Place at 7:05 pm.

Saturday’s contest is the lone game of the weekend for the Rockets, they’ll then be off until Friday, September 30th when they’ll head north to face the Prince George Cougars.

Meanwhile, the Winterhawks opened their season on Friday night in Kamloops, downing the Blazers 3-0. Gabe Klassen recorded a pair of goals, with Marcus Nguyen chipping in the middle goal. Jack O’Brien posted a pair of assists. Dante Giannuzzi stopped all 24 shots he faced, while the Winterhawks offence peppered Blazers goaltender Dylan Enrst with 38 shots.

It’s the third time that the Rockets have opened their season against the Winterhawks since relocating to Kelowna in 1995.  The last time was 20 years ago, falling 3-2 to Portland at Prospera Place on September 20, 2002.

Single game tickets for Saturday’s game are available at Select Your Tickets. Tickets can be purchased online through www.selectyourtickets.com, at the Prospera Place box office, or by phone at 250-762-5050.

Single-game tickets for the remaining Rockets home games will go on sale on September 29.

All Rockets games will be available on WHL Live on CHL TV.  WHL Live on CHL TV is available to fans anywhere in the world, providing high-quality streaming of WHL games on Apple TV, Roku, and Amazon Fire TV platforms, via mobile with iOS and Android, and on web using Safari or Google Chrome web browsers. Visit watch.chl.ca for complete details and subscription options.

The Kelowna Rockets opening night roster features 27 players, including Colton Dach (Chicago) and Talyn Boyko (New York Rangers) who are both away at NHL Training Camps.

To read more about each player on the roster click here to read how the opening night roster was built.

Series at a glance

The Rockets will post the Pushor Mitchell Projected Lineup complete with line combos at least half an hour prior to puck drop for all games this season. You will be able to find the graphic on our Twitter, Facebook and Instagram stories.

Use #Rockets1stGoal in your tweet on Twitter, tagging the Rockets account @Kelowna_Rockets, telling us which Rocket will score first before puck drop on all game days. If you’re right, you could win a three-topping large pizza from Papa John’s BC and a puck signed by that player.

Contest open to BC residents only/ one entry per account

Printed lineup sheets will not be available at games this season, they can be accessed online by visiting the game day program.

The Game Day Program will be available in the same spot, it comes complete with game notes, stats, team rosters and entry forms for the Rockets intermission contests.

The sheet and program will be uploaded by 3:00 p.m. on gameday.

Season tickets are still available, don’t miss a minute of the Rockets action and secure yours today. Click here to learn more.