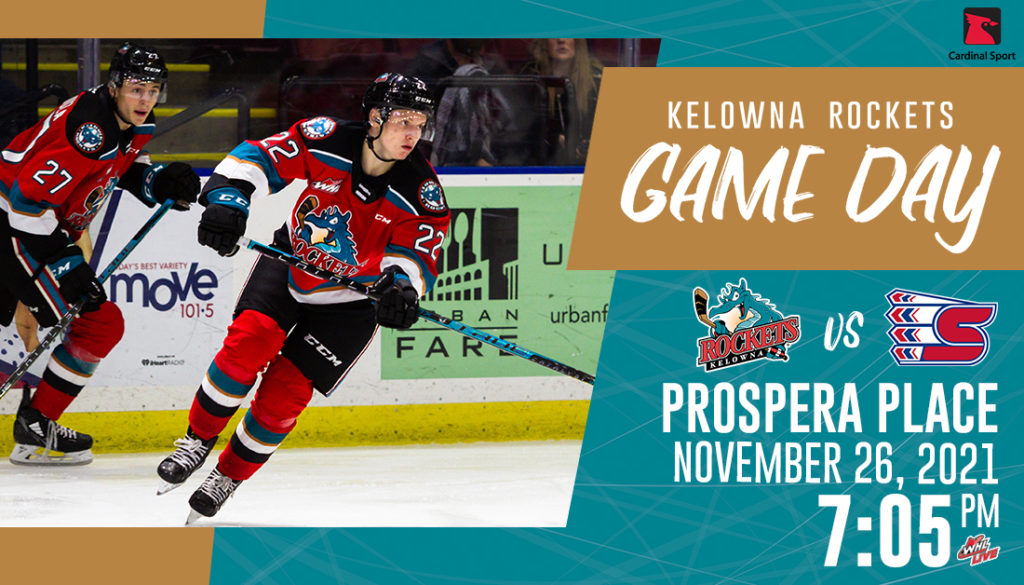 The Rockets will open a four-game homestand this weekend, starting on Friday night when they host the Spokane Chiefs at Prospera Place. The Prince George Cougars will then stroll into town for a Saturday night matchup. Both games kick-off at 7:05 p.m.

Spokane and Kelowna didn’t have to wait long for the rematch, the two last played on Wednesday at the Spokane Veterans Memorial Arena in Spokane, Wa. The Chiefs snapped a six-game losing streak, taking down the Rockets 2-1. Pavel Novak scored the lone goal for the Rockets, while Talyn Boyko made 24 saves.

The Rockets will be without head coach Kris Mallette, forward Andrew Cristall and defenceman Caden Price. The trio have departed for the Capital City Challenge, a four-team tournament featuring Canada’s National Women’s Team and three national men’s under-17 teams at TD Place Arena, home of the Ottawa 67’s of the Ontario Hockey League.

The Kelowna Rockets have called up forward Grady Lenton and defenceman Logan Dochuk to join the team as affiliate players. The pair made the trip to Spokane on Wednesday but did not dress for the game.

A well-rested Cougars team will be waiting for the Rockets on Saturday. Prince George has been off since last Saturday, they split a two-game series against the Tri-City Americans last weekend.

WHAT’S GOING ON AROUND THE RINK

Tickets for all Rockets home games are now available at selectyourtickets.com, at the Prospera Place box office or by phone at 250-762-5050.

The online 50/50 will give fans in Rockets fans located in British Columbia the chance to win during every Rockets home game this season. The 50/50 will also raise important dollars for the Kelowna Minor Hockey Association.

Due to Covid-19 protocols, printed lineup sheets will not be available at games for fans this season. They can be accessed online in the game day program.

The current B.C. Provincial Health restrictions allow for 50% capacity at Prospera Place. All fans attending will need to abide by the BC Provincial Health Authority, Prospera Place and the Western Hockey League‘s recently announced COVID-19 health and safety requirements which includes masks, double vaccination and their BC vaccine card.