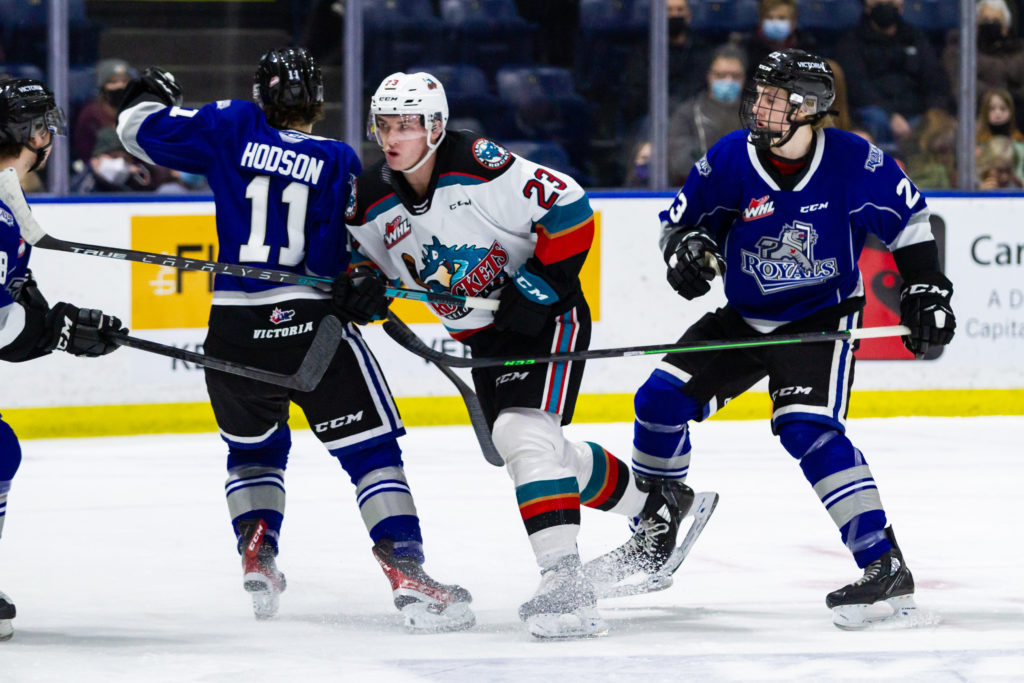 After having the week off, the Kelowna Rockets will be back in action on Friday and Saturday when they host the Victoria Royals at Prospera Place.

Kelowna was scheduled to play in Prince George on Tuesday and Wednesday, both of those games were postponed due to the Cougars pausing of team activities due to Covid-19.

The Royals have not played since their last meeting with the Rockets on January 1 against the Rockets, it was announced last week that Victoria was pausing team activities as a result of multiple players and staff being added to the WHL COVID-19 Protocol List due to exhibiting symptoms or having tested positive for COVID-19.

Kelowna was last in action last Saturday against the Portland Winterhawks, where they fell 3-1 to the Winterhawks at Prospera Place.  Jake Poole scored his seventh of the season 31 seconds into the game, but Portland pushed ahead with three straight goals. Taylor Gauthier made his debut with the Hawks, turning aside 38 of the 39 shots fired on him by the  Rockets. Talyn Boyko stopped 21 of the 24 shots.

The Rockets will be without forwards Mark Liwiski and Nolan Flamand. Liwiski has been suspended for two games as a result of his major and a game misconduct in the game against the Winterhawks, Flamand is out for the next three to five weeks with a lower body injury.

Tickets for Friday and Saturday’s game, as well as all other Rockets games are available at selectyourtickets.com, at the Prospera Place box office or by phone at 250-762-5050. Select Your Tickets is open 11:00 a.m. – 4:00 p.m. Tuesday through Friday and opens at 1:00 p.m. on Saturday home game days.

THE LAST TIME THESE TWO MET

The Rockets made it five straight wins with a 5-2 win over the Victoria Royals on New Year’s Day. Talyn Boyko backstopped the Rockets to their 16th win of the season, while Jake Lee posted a pair of goals and assists. Mark Liwiski, Jake Poole, Max Graham and Jake Lee were the goal scorers for Kelowna.

The online 50/50 will give fans in Rockets fans located in British Columbia and those who are attending the game the chance to win during every Rockets home game this season. The 50/50 will also raise important dollars for the Kelowna Minor Hockey Association.

Due to Covid-19 protocols, printed lineup sheets will not be available at games for fans this season. They can be accessed online in the game day program.

The program will be uploaded by 3 p.m. on game day.

All fans attending Rockets games will need to abide by the BC Provincial Health Authority, Prospera Place and the Western Hockey League‘s recently announced COVID-19 health and safety requirements which includes masks, double vaccination and their vaccine card.