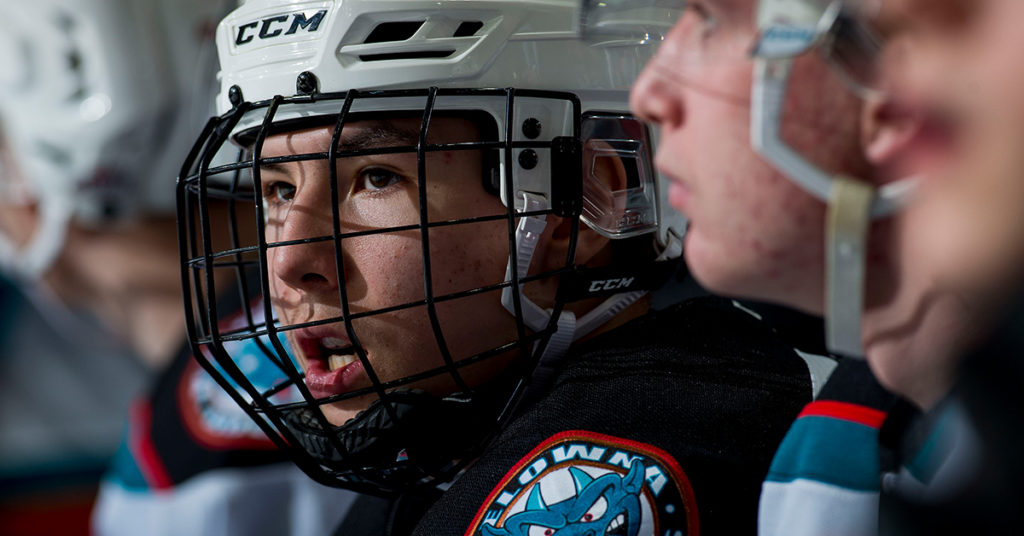 Forward Nolan Flamand gave fans a taste of what to expect in his first few games as a Kelowna Rocket before the season came to an end early due to Covid-19 back in March.

Fast and highly skilled, Flamand impressed, leaving fans wondering how he fell to the Rockets in the second round.

Instead of playing bantam hockey during his draft campaign in 2018-19, he played AAA midget hockey with the Saskatoon Blazers of the SMAAAHL. Flamand held his own playing up a level, collecting 27 points (5G, 22A) and four penalty minutes in 41 games.

Projected to be a WHL first-round bantam pick, Flamand fell to the Rockets at 27th overall—four picks into the second round.

With the 27th pick in the second round we've drafted Nolan Flamand from the Saskatoon Blazers. pic.twitter.com/0Kz34tbqzT

The Rockets scouting staff was ecstatic when Flamand’s name was still on the board when it came time to pick.

“The biggest impact is his playmaking ability,” said Lorne Frey on Flamand’s skill. “He has great vision and the ability to set up his teammates in scoring position. I think that’s his forte, when you look at his stats his assists are way up. If you’ve got a scorer on your team, he’s definitely going to help that guy out getting him the puck.”

Following a single preseason contest appearance and a strong camp with the Rockets, Flamand returned to the Blazers for another year of midget hockey with a renewed confidence. Looking to him for leadership, he was named an assistant captain.

He nearly doubled his point total from the year before, collecting 51 points (8G, 43A) in 43 games. At Christmas time he impressed at the Mac’s Tournament in Calgary, picking up three points (2G, 1A) in four games against some of the top midget teams from around the world.

“It was a pretty good season, we had a great set of players on the team and great coaches. It was definitely a great year, it kind of sucked the way it ended but there were a lot of positives throughout the season,” said Flamand about his season with the Blazers.

Flamand credits already having a year under his belt in the Saskatchewan Male U18 ‘AAA’ Hockey League, his leadership and physical growth with what helped propel him to another level this past season.

“I think my mental game played a huge part in my success. Also, my strength, knowing that last year I was an underage player but this season and coming in this season as a bigger player and being a leader to the kids who were joining the team.”

When the Rockets headed out on their prairie road trip in early December they made Saskatoon their home base for their games against the Prince Albert Raiders and Saskatoon Blades. While in his hometown, the Rockets invited their top prospect to come and spend time around the team.

“It was really cool to see the boys, especially after the overtime win against Saskatoon. When I walked into the room they were calling me Flams, as a young prospect it was a good feeling that they recognized me.”

The Blazers season came to an end early after four playoff games, Flamand collected a goal and five assists as well as two penalty minutes.

Following their WHL Draft year, players allowed to play in five regular-season games with their WHL club while their midget club is still in action. Once their midget team’s playoff run comes to an end that prospect is eligible to play in more than five games.

The Saskatoon, Sask. product was called up to the Rockets and was expected to stay with the Rockets for the remainder of the WHL season after the Blazers were eliminated from the playoffs.

“It was an up and down moment for me, knowing it was my last game with Blazers but then right after my dad told me that I had received the call up to Kelowna.

“I was kind of nervous making the jump to WHL. There are a lot of big guys and I’m obviously not really that big, I was just getting my name in the league and my first game. After a couple of practices and getting to know the boys a bit, I felt more comfortable once the first game came around.”

The Rockets have called up Nolan Flamand from the @stoonblazers.

Flamand was selected 27th overall by Kelowna during the second round at the 2019 WHL Bantam Draft. pic.twitter.com/nNNtF2YszZ

His debut went off without a hitch, the Rockets downed the Seattle Thunderbirds 6-0 on March 6 in front of his family who had made the trip to Kelowna.

“It was a big confidence booster for me, I got a lot more ice time than I had expected in my first game. It was also cool to see how they react when the Rockets win and their chant at the end of the games.”

Despite not registering a point in his first three games, the Rockets first pick in the 2019 WHL Bantam Draft showcased his high hockey IQ and speed while racking up major minutes for a 16-year-old who was making his debut and getting his feet wet.

“Coming into Kelowna I didn’t expect too much as a young player. Going into your first game you don’t think you’re going to get that much ice time because you’re the young guy, but as the game went on I got more and more. For me during my first few games, it was about not focusing on the highs, just play your game and let the game flow.”

With the season paused and eventually cancelled, Flamand returned home. Without access to ice he kept busy around home rollerblading, focusing on his mental game and working out. He says that once golf courses were able to open up for the season that kept him even busier.

“Once golf came around, that was another big help to my mental game. I’ve played in a few tournaments to try and keep that competitive mindset.”

In case you were wondering, Flamand says that he has a four-plus handicap and that his mid-game is the strongest part of his golf game. He says that for him mentally there is a difference between playing in a hockey game and playing a round of golf.

While he enjoys hitting the golf course right now, Flamand hopes to hit the ice soon in Kelowna and take a shot at cracking the Rockets lineup full-time for the upcoming 2020-21 season.