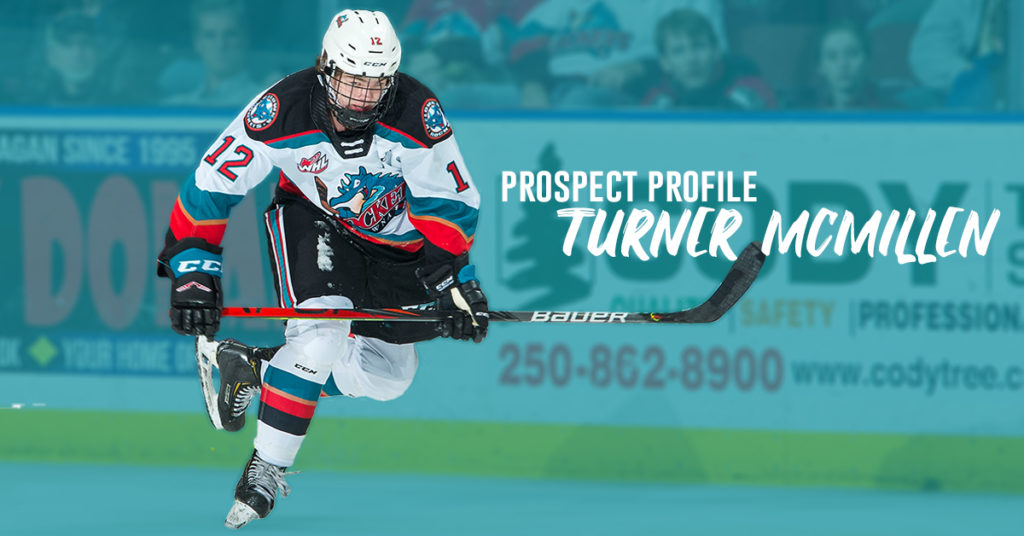 Turner McMillen knew that he had a shot at being drafted during the 2018 Bantam Draft, he had just put together a solid 25 point (13G, 12A) season in 31 games with the Estevan Bantam AA Bruins. But the son of former Tacoma Rockets captain Dave McMillen would have to wait to see if a team had picked him, he was sitting in a class that didn’t allow cell phones back on May 3, 2018, when the WHL Bantam Draft was taking place.

It turns out he didn’t have to wait after all. One of his other teachers who had been following the draft came running into the classroom to deliver the news personally to McMillen, he had been selected by the Rockets 191st overall in the ninth round.

“It’s truly an honour. Bruce treated me so awesome back in the days when I played in Tacoma. Having my son drafted to the WHL is great, but to have him drafted by the organization I played two seasons for is something special,” said Dave following the draft. “I know the Rockets organization is all about work ethic and the hard work is just beginning for Turner. I’m a proud Dad today.”

Turner attended his second Rockets camp this past fall, he said that he was far more at ease the second time around.

“I felt way more comfortable this year at camp,” said Turner. “I was able to display my skill and show how I play my game better than the year before.”

When asked to describe his game, the forward said that he can find another gear while also doing the dirty work in the corners.

“I’m a 2oo foot player who has grit and speed. I block shots and I like to put the puck in the net, my greatest strength is probably my speed.”

Following the Rockets camp, he returned to the Prince Albert Mintos U18 AAA team for his second season with a renewed confidence.

The Mintos also played in The Mac’s Midget AAA World Invitational Tournament presented by Circle K after Christmas. He put up six assists in four games.

“There were a lot of good teams from all over, we got to play against a team from Russia. All of our games were super close, we beat the team that won the tournament, so it was a really good experience.”

Despite their season coming to an end early due to Covid-19, McMillen was named the Mintos Playoff MVP. He had a goal and two assists in three playoff games.

Being drafted by the Rockets would kick off a series of firsts for Turner. He was the first son of a former player from the organization to be drafted, next up on the docket would be to sign with the team and make his debut.

He inked a Western Hockey League Standard Player Agreement earlier in the season and towards the end of January got the phone call that the Rockets were calling him up as an affiliate player. The timing couldn’t have been more perfect, McMillen was turning 17 that week.

“It was a good birthday present to find out that I was going to get to play in the WHL. I then had to hop on a plane for the first time, all by myself on my birthday. The flying part wasn’t as bad as I expected.”

McMillen arrived at the arena in time to take part in the morning skate and get acquainted with some of the veteran players.

“I was really nervous and didn’t know what to think, I had never played in front of that many fans before. Nolan Foote, Alex Swetlikoff and Mark Liwiski came up and shook my hand and introduced themselves.”

McMillen played in his first two games against the Spokane Chiefs on January 31 and February 1. Despite both games being losses, the newly minted 17-year-old learned what he had to work on to stick around the WHL full time.

“It was a lot faster than I’m used to, I didn’t really expect that. I learned that I have to get stronger, quicker and faster if I want to move up to the next level.”

Since the end of the hockey season, McMillen has been busy around the family farm just outside of Carievale, Sask.

“The gym was closed, so I was working out lots around the farm and the house over the last few months. With things reopening, I just got back into the gym and have been able to start weighted workouts again.

“We just got the cattle out to pasture two weeks ago, so we’re busy making sure that they don’t get out and that they’re taken care of.  Right now we’re also getting ready to cut hay.”

Carville is 15 minutes away from the Manitoba border and 15 minutes to the American border. Growing up in a small town gave McMillen the chance to play and practice more than most kids.

“There was always lots of ice. When I played atom and novice I was on a team with nine players, I would get the chance to play 45 to 50 minutes a game because of how small our roster was. After the games, I always stayed on the ice until 11 or 12 after games to continue working on my skills.”

He says that living up on a farm has taught him lots about hard work.

“The farm has really taught me how to have a good work ethic. It’s also taught me lots about responsibility, especially when it comes to driving tractors and working. I can’t quit until it’s dark and my work is done.”

McMillen hopes that what he has learned on the farm and the ice will help him follow his dad’s footsteps and crack the Rockets roster full-time in the near future.