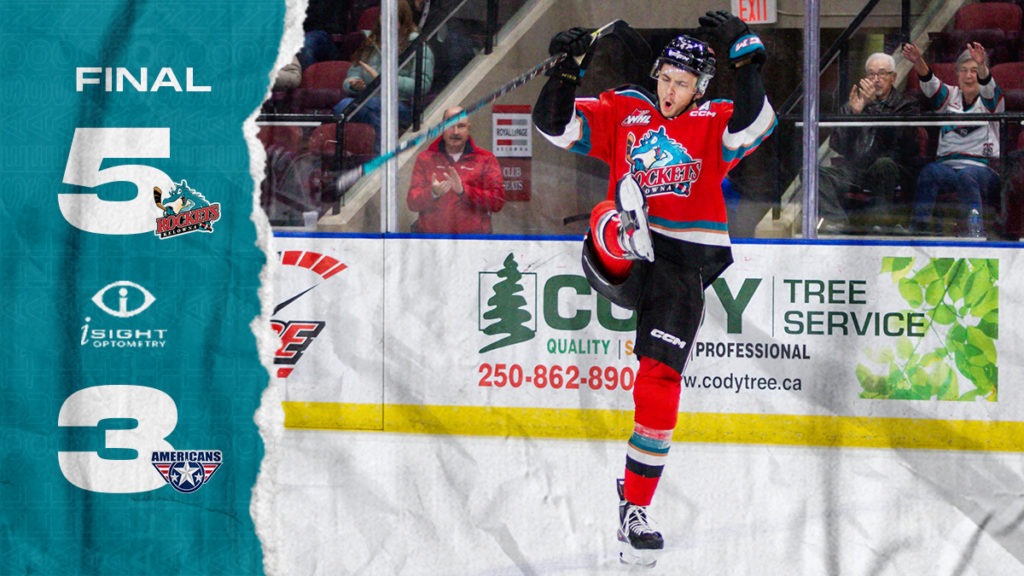 The Kelowna Rockets picked up their second straight win with a 5-3 victory over the Tri-City Americans on Saturday night at Prospera Place.

Kelowna scored the opening goal of the game but Tri-City pushed back with three unanswered goals. The Rockets responded with four consecutive goals to complete the comeback.

“Obviously we got into a couple of penalty troubles,” said defenceman Jackson Desouza in his postgame interview. “The guys really beared down, Jari played really well and the guys sacrificed that’s exactly what we need to do in those types of  games.”

“It felt good, I had a couple of scoring chances in the last couple of games. But honestly, the two goals is nice but getting the two points tonight and the two last night was way better.”

Jackson DeSouza (1) teed up a bomb on Gabriel Szturc’s clean faceoff win to get Kelowna on the board first. Former Rocket Ethan Ernst (13) tied the game up four minutes later. Tri-City then took their first lead of the game on a short-handed  Tyson Greenway (11) goal.

Ernst set up Reese Belton (3) out in front of the Rockets net early into the second. DeSouza (2) jumped into the play up the ice while the Rockets were shorthanded to pull them back within one with his second of the game. Carmichael’s rebound popped out to Adam Kydd (9) standing at the right side of the net. Rockets captain Colton Dach’s night came to an early end in the final minute of the second period after he was given a five-minute checking to the head major and a game misconduct for a high hit on Drew Freer.

Andrew Cristall (15) pushed Kelowna ahead 7:18 into the third after picking off Ernst’s failed clearing attempt. Turner McMillen appeared to tie give the Rockets a two-goal lead in the final minutes of the game but it was called back due to the puck not crossing the line. Adam Kydd (10) added  an empty netter in the final seconds.

The Rockets will now head south for a two-game trip the United States where they’ll face the Seattle Thunderbirds on Wednesday and the Everett Silvertips on Friday.

Kelowna’s next home game is Saturday, November 26th when they’ll face the 2022 Canadian Hockey League Rookie of the Year Brayden Yager and the Moose Jaw Warriors.