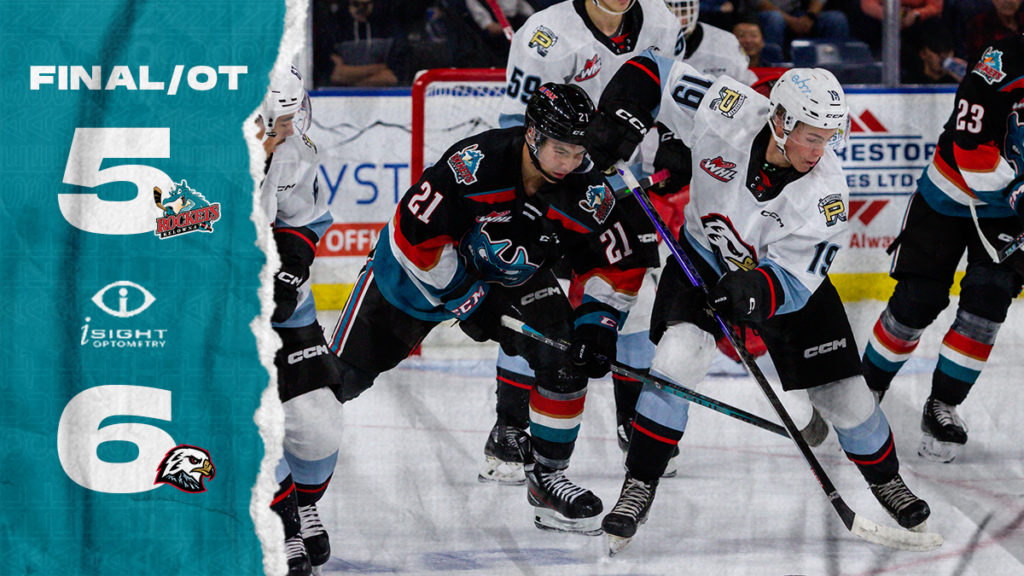 The Kelowna Rockets opened their 2022-23 regular season with a 6-5 overtime loss to the Portland Winterhawks on Saturday night at Prospera Place in Kelowna, BC.

Falling behind twice, Kelowna pushed back to take a 3-2 lead heading into the third period. The Rockets created a two-goal cushion early in the third, but Portland pushed back. Kelowna once again restored the two-goal lead just before the middle of the third frame, but Portland responded with two straight goals to force overtime, where they eventually won the game.

Rockets overage forward Adam Kydd posted a career-high five-point night (1G, 4A), including the opening goal of the season. Gabriel Szturc, who was celebrating his 19th birthday, set a career-best four-point night (2G,2A). Jari Kykkanen made 34 saves on 40 shots.

After being hauled down by Elias Carmichael, Gabe Klassen (3) opened the scoring 5:11 into the game on a power play. Nolan Flamand set Adam Kydd (1) on the backdoor with the Rockets first goal of the season.

Carter Sotheran sent a pass up the middle of the ice to a streaking Klassen (4) who snuck his way past the Rockets two defencemen. Kydd danced his way around a Winterhawk defenceman getting a weak shot off that left a rebound on the doorstep for an incoming Gabriel Szturc (1), giving the Rockets their first lead of the game. Andrew Cristall (1) ripped a backhanded shot past Giannuzzi before the end of the second period.

Cristall (2) pushed the Rockets out to a two-goal lead while on the power play 54 seconds into the third period. Klassen (5) and Szturc (2) quickly traded goals. Klassen (6) inched Portland back within one with a short-handed tally, just over a minute later Luke Schelter (1) tied the game.

In overtime Cristall lost his footing, giving Luca Cagnoni (1) the time and space to wire home the winner.

The next Rockets game is Wednesday, October 5th, when they’ll host the Victoria Royals at 7:05 pm.

Single game tickets for all Rockets home games will go on sale on Thursday, September 29th at Select Your Tickets. Tickets will be available to be purchased online through www.selectyourtickets.com, at the Prospera Place box office, or by phone at 250-762-5050.

Season tickets are still available, don’t miss a minute of the Rockets action and secure yours today. Click here to learn more.