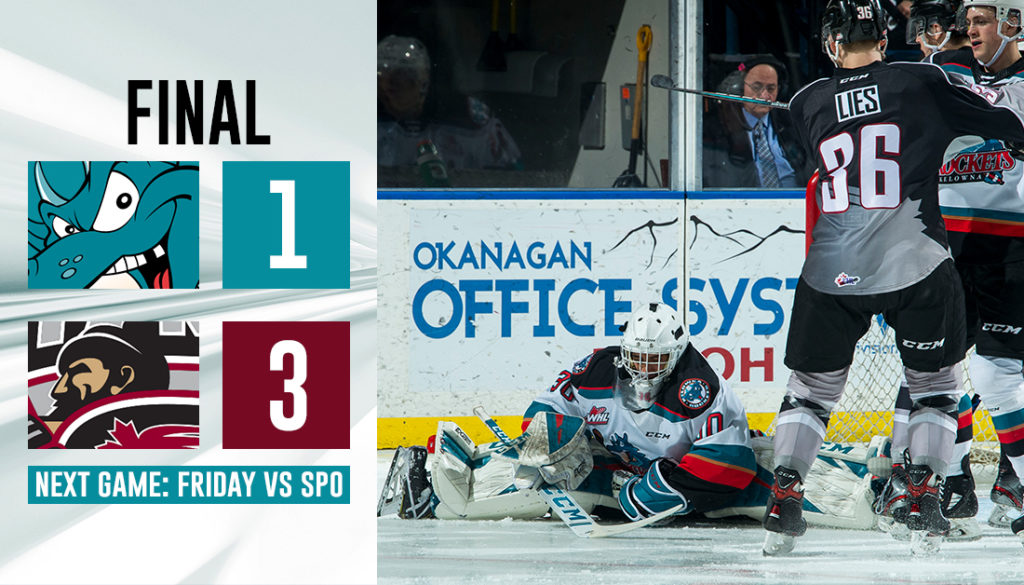 The Kelowna Rockets closed out their three-game weekend with a 3-1 loss to the Vancouver Giants on Sunday night at Prospera Place.

Vancouver and Kelowna met last night at the Langley Events Centre, with Kelowna securing a 3-2 victory off of the blade of Kaedan Korczak. The Giants flipped the switch tonight and stole the game away from the Rockets.

The Giants penalty kill was able to shut down the Rockets power play four times, while their power play was successful twice on the night.

“It was a special teams night,” said head coach Adam Foote. “I mean they capitalized two-for-three and we didn’t, zero-for-four. We’ve gotta win those.”

“We lost coverage on two goals, we just didn’t work away from the puck. It happened on the pk which cost us, and it happened on the power play. We all know you’ve gotta be good in those categories and special teams and we weren’t.”

Kvasnica (2) opened the scoring 2:31 into the first period with a power-play marker.

Kvasnica (3) netted his second of the night and the eventual game-winner just before the midway point of the third period. Holden Katzalay (2) created a three-goal cushion for the Giants with just over five minutes to play. Forty-six seconds after Katzalay’s goal, Alex Swetlikoff (10) broke  Tendeck’s shutout bid while standing in front of the Giants net.

Kelowna was 0-for-4 on the power play, while Vancouver went 2-for-3 with the man advantage.

“I think the biggest thing was special teams,” said Rockets assistant captain Matthew Wedman. “We just weren’t good enough, we were getting outworked on the power play and the penalty kill. I think that was the biggest contributor.”

The Rockets will be back in action on Friday when they host the New Jersey Devils prospect Ty Smith and the Spokane Chiefs.