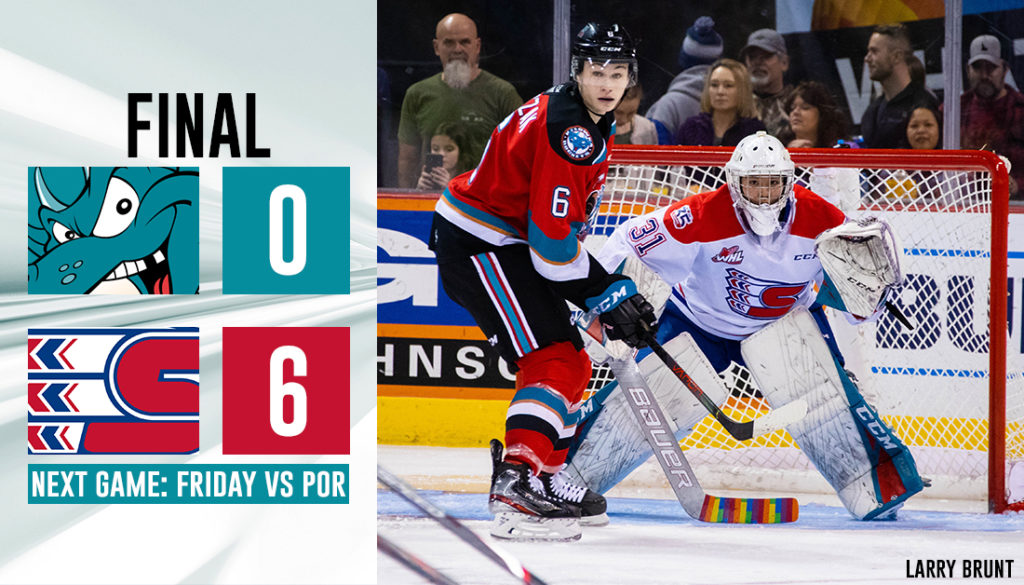 The Kelowna Rockets were blanked 6-0 by the Spokane Chiefs on Saturday night at the Spokane Veterans Memorial Arena in Spokane, Washington.

Spokane’s power play scored five of their six goals while on the man advantage. Former Rockets netminder, Jame Porter stopped 17 shots to pick up his first shutout of the season.

Leif Mattson (12), a former Rocket, opened the scoring 7:12 into the game. Adam Beckman (36) and Mattson (13) scored back-to-back power-play goals to make it a three-goal lead for the Chiefs.

Chiefs captain, Ty Smith (8) scored the lone goal of the second period while on the power-play.

Luke Toporowski (17) and Brandon Reller (4) netted the Chiefs fourth and fifth power-play goals of the game during the final frame.

Kelowna was zero-for-three with the power play, while Spokane was five-for-nine with the man advantage.

Mattson was named the first star of the game, the Stonewall, MB product had two goals and an assist.

Oh hey there 🍃 and James 😅 pic.twitter.com/8sCHdEE3ox

Kelowna will be back in action on Friday when they host the high flying Portland Winterhawks for back-to-back home games at Prospera Place next weekend. Tickets are on sale at selectyourtickets.com, at the Prospera Place box office or by phone at 250-762-5050.