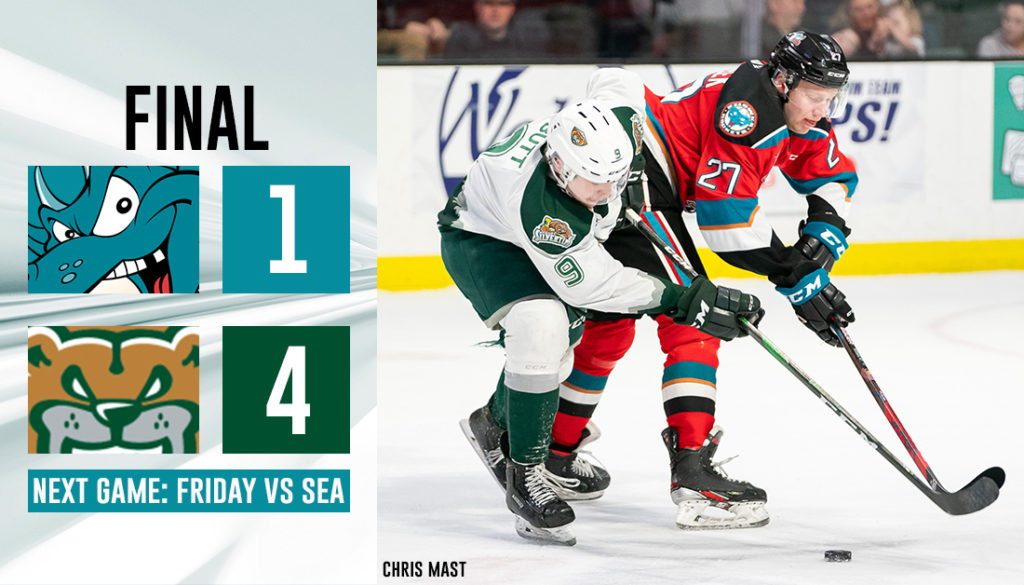 The Everett Silvertips downed the Kelowna Rockets 4-1 on Saturday night at the Angel of the Winds Arena in Everett, WA.

The Rockets came into tonight playing their sixth game in nine nights. Kelowna faced Victoria last Friday and Saturday on the island, before heading north to take on the Prince George Cougars on Tuesday and Wednesday. Kelowna hosted the Silvertips last night at Prospera Place where they fell 4-3 in overtime to Everett.

Kelowna opened the scoring, but the sixth-ranked team in the week 23 edition of the Kia CHL Top-10 Rankings stormed back to win their ninth straight game. The weekly rankings of the CHL’s Top-10 teams are selected by a panel of National Hockey League scouts.

Jonas Peterek (13) put the Rockets on the board first 14 minutes into the game, Bryce Kindopp (38) answered for the Silvertips 39 seconds later.

Tied at one heading into the second, Jackson Berezowski (18) and Ethan Regnier (13) pushed Everett ahead with a pair of goals 1:28 apart before the three-minute mark of the period. The Rockets called a timeout, and Cole Schwebius replaced Roman Basran in net following the Regnier goal at 2:52.

Dillon Hamaliuk was a game-time decision, the forward left last night’s game with an undisclosed injury. Hamaliuk participated in warm-ups but did not play in the game.

The Rockets could have clinched a playoff spot tonight if they had:

If the Rockets lost in overtime or a shootout AND the Prince George Cougars lost in regulation against the Kamloops Blazers.

Kelowna’s next chance to book a playoff spot will come on Friday night when they host the Seattle Thunderbirds for the final meeting of the regular season. Tickets are on sale at selectyourtickets.com, at the Prospera Place box office or by phone at 250-762-5050.