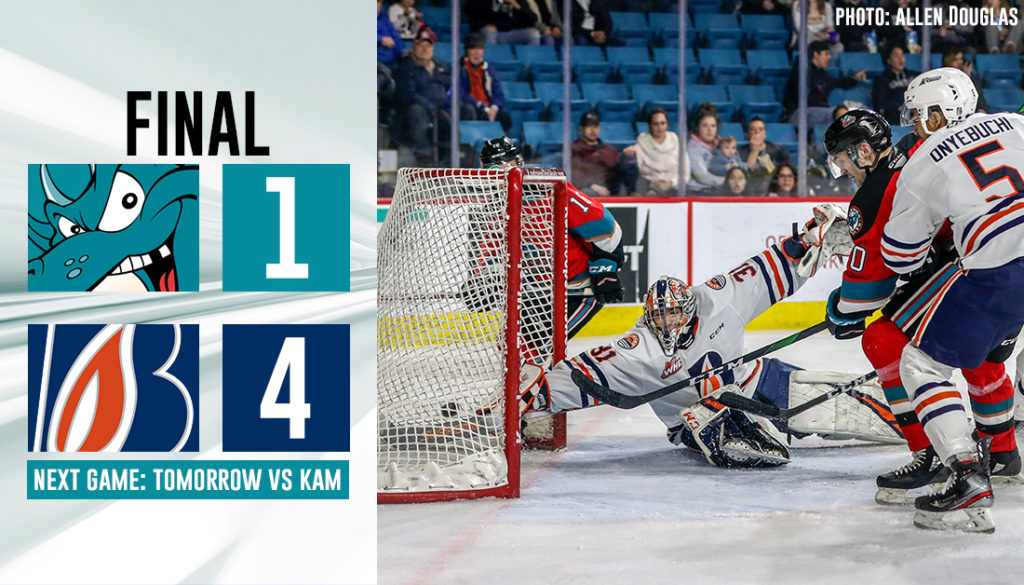 The Kelowna Rockets fell to 4-1 to the Kamloops Blazers on Friday night at the Sandman Centre in Kamloops, B.C.

Connor Zary posted two goals for the Blazers, both going in off of his skate. Dylan Garand stopped all but one of the 24 shots fired on him.

Zary (23) opened the scoring 14:16 into the game after the puck went off his skate and into the Rockets net. Libor Zabransky (3) netted his first as a Blazer 1:30 after Zary’s goal, launching a bomb during a delayed called.

With two Rockets sitting in the penalty box, Zary (24) redirected his second the night in off of his skate once again, during the second period. Matthew Wedman (10) got one back for the Rockets just after the power play came to an end, he was parked in front of the Blazers net.

Brodi Stuart (4) restored the three-goal lead on a breakaway early in the third period.

The Rockets power-play unit went 0-for-5 against the league’s best penalty kill team. Heading into tonight, the Blazers lead the league with an 87.3% successful pk unit, only allowing 19 goals on 150 chances. The Blazers were 1-for-10 with the man advantage.

Roman Basran turned aside 41 of the 45 Blazers shots. Kamloops outshot the Rockets 45-24.

The Rockets will face the Blazers once again tomorrow night at Prospera Place. Tickets are on sale at selectyourtickets.com, at the Prospera Place box office or by phone at 250-762-5050.

Bring a donation of a non-perishable food item for the Kelowna Food Bank to attend the CIBC Family Skate next Sunday, January 12, 2020, from 1:30 PM to 3:00 PM at Prospera Place. The entire Rockets team and Memorial Cup will be on hand to take photos. Please note: There will be no skate rentals or skate sharpening on site.