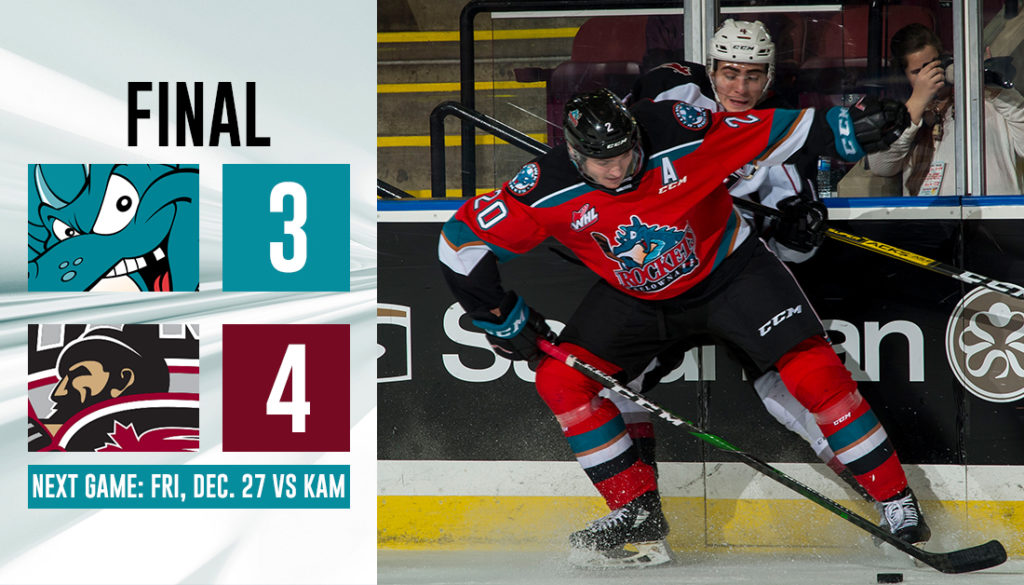 The Kelowna Rockets fell 4-3 to the Vancouver Giants Wednesday night at Prospera Place in Kelowna, BC to close out the first half of the 2019/2020 season.

Newly acquired defenceman Conner McDonald made his debut for the Rockets, picking up assists on all three Rockets goals and second-star honours. Matthew Wedman made his home debut with Kelowna, going 19/29 in the faceoff dot and netting a goal.

Tristen Nielsen (16) re-established the Giants two-goal lead just before the ten-minute mark of the third period. Jadon Joseph (8) brought Kelowna within one again with his first goal as a Rocket. Tyler Preziuso (13) padded the lead again with 5:40 to play. Matthew Wedman (9) inched the Rockets closer again. The Rockets pressed in the final moments of the game on the man advantage with an empty net but could not beat Giants netminder David Tendeck.

His first 🚨 as a Rocket!

The Rockets were 0-for-5 with the man advantage, while the Giants were 1-for-3 on the power play.

Kelowna’s record is now 18-11-1-2. The team will be back in action on Friday, January 27 when they host the Kamloops Blazers for their first game of the second half of the season. Tickets are on sale at selectyourtickets.com, at the Prospera Place box office or by phone at 250-762-5050.