THE WESTERN HOCKEY LEAGUE HAS ANNOUNCED ITS RETURN TO PLAY PROTOCOL FOR THE 2020-21 SEASON, CLICK HERE TO LEARN MORE
THE ROCKETS ONLINE STORE AND STORE IN PROSPERA PLACE ARE TEMPORARILY CLOSED
October 5, 2019 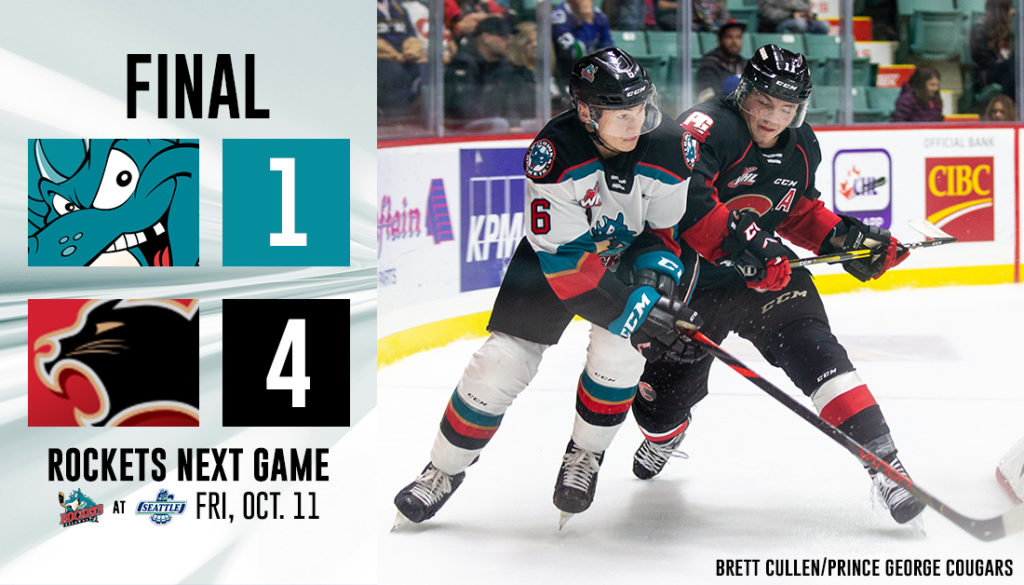 The Kelowna Rockets were downed 4-1 by the Prince George Cougars Saturday night at the CN Centre in Prince George, BC.

The Cougars were hungry for a victory as they remained winless on the season with a record of 0-4-0-1 entering tonight’s game.

During the first period, Trevor Wong stole the puck from a Cougar but was called for slashing. During the ensuing penalty kill, Jack Sander‘s (1) shot ricocheted off of the post and past Rockets starter Roman Basran to give the Cougars a 1-0 lead at 17:03.

The Cougars power play extended their lead to two during just before the midway point of the second period when Ethan Samson (1) tapped in a pass at the backdoor. Nolan Foote (2) cut the Cougars lead in half when he launched a power play shot past Tyler Brennan.

Novak to Nolan, get used to hearing that.
🚨 @foote_nolan
🍎 Pavel Novak
🍏 @Korczak21pic.twitter.com/lJy5mri3Lg

Josh Maser (2) and Filip Koffer (1) both scored empty-net goals in the final minute of the game to lift the Cougars to a 4-1 lead.

The two won’t have to wait long to see each other again, the Rockets will return to Prince George for their third meeting of the season on Wednesday, October 23.

Rocky Raccoon and some of the Rockets players will be in attendance at the CIBC Run For The Cure in City Park tomorrow from 9:00am to 10:00am.

The Rockets are back in action on Friday, October 11 when they head to Kent, WA to face the Seattle Thunderbirds.  You can listen to the game on AM 1150, watch on WHL Live or follow the Rockets Twitter for live updates.

It’s not too late to become a season seat holder and secure your 2020 Memorial Cup presented by Kia Package.  Prorated pricing and a payment plan is available, fill out this form or contact Andrew Deans / Gavin Hamilton at the Kelowna Rockets Office at 250-860-7825. Don’t be stuck outside of Prospera Place in May, become a season ticket holder today and guarantee your seats