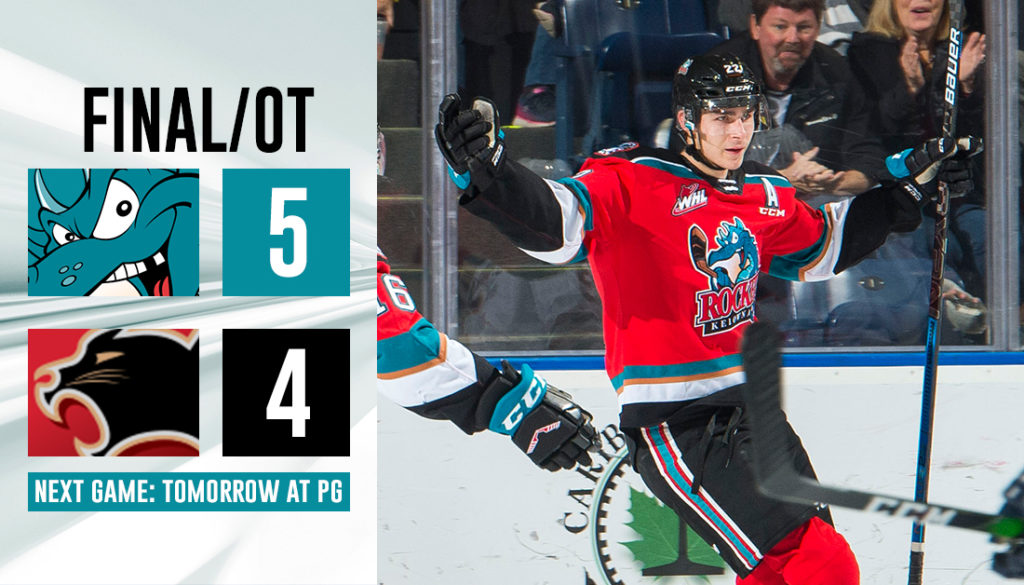 The Kelowna Rockets picked up their sixth overtime victory of the season with a 5-4 victory over the Prince George Cougars at the CN Centre in Prince George on Tuesday night.

The Rockets held a 2-1 lead heading into the third period. In the final period of regulation time, the two teams found the back of the net a combined five times to force extra time. Dillon Hamaliuk saved the day in overtime while Roman Basran stopped 20 shots to secure the Rockets 26th victory of the season.

Kaedan Korczak (11) wired home a one-timer that Kyle Topping dropped back to him 3:46 into the game. Cole Moberg (9) tied up things on the Cougars first power-play of the game.

Jonas Peterek fed the puck out from the left corner to an awaiting Matthew Wedman (17) in front of the Cougars net to give the Rockets a 2-1 lead 21 seconds into the middle period.

Dillon Hamaliuk (13) capitalized on the Rockets fifth power play of the game 4:49 into the third. Cole Moberg (10) wired a one-timer past Roman Basran five seconds into the power play to inch the  Cougars back within one. Connor Bowie (11) fired a shot that deflected off of Korczak’s arm and into the Rockets net to tie up the game with 7:10 to play in the period. Pavel Novak (22) pushed the Rockets in front again late in the period, but the Cougars would answer with 19.6 seconds left in the third with a goal off of the stick of Filip Koffer (8).

The Cougars were making a line change when Alex Swetlikoff and Hamaliuk skated in on a two-on-one, Swetlikoff teed up Hamaliuk (14) with a one-timer to launch the Rockets to victory 2:17 into extra time.

The Rockets went 1-for-6 on the power play, while the Cougars were 2-for-6 with the man advantage.

Pavel Novak had a goal and two assists, his eighth, ninth and tenth points against the Cougars this season, en route to being named the third star of the game.

Kelowna will be back in action tomorrow night when the Cougars host the Rockets again, puck drop is set for 7:00 p.m.