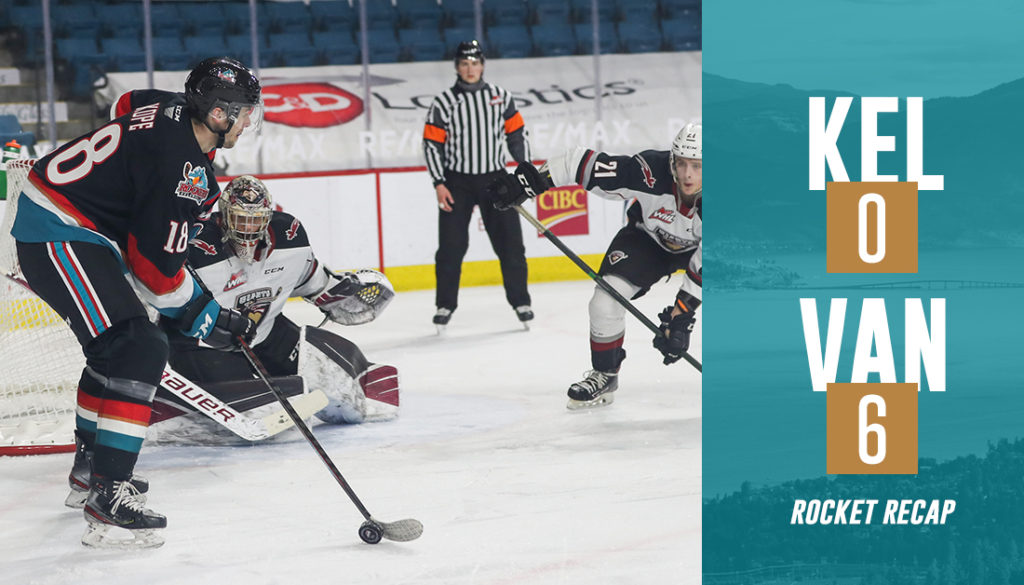 The Kelowna Rockets were shutout 6-0 by the Vancouver Giants on Sunday night at the Sandman Centre in Kamloops, BC.

Tristen Nielsen and Mazden Leslie had multi-goal games for the Giants, while Colorado Avalanche prospect Trent Miner blanked the Rockets.

In a penalty-filled game, the Rockets amassed 29 penalty minutes while the Giants racked up 41.

Nielsen was the story of the first period, netting three goals to pick up a natural hat-trick in the opening twenty. His first came while short-handed 3:56 into the game, he then capitalized on the power play and completed the hat-trick even strength with just under two minutes to go in the period.

Leslie carried the momentum for the Giants into the second frame. The 2005 born defenceman found the back of the net twice, scoring the first and second WHL goals of his career, to put Vancouver up 5-0 after two periods of play.

Adam Hall (1) extended the Giants lead to six early in the third.

The Rockets power play couldn’t get off the ground, failing on five attempts. Vancouver was successful one out of four times on the man advantage.

Roman Basran turned aside 31 shots, while Miner stopped 20 to pick up his first shutout of the season.

The Rockets only change in their lineup from Friday was in net, Basran started in place of Cole Schwebius. Noah Dorey, Rilen Kovacevic, Scott Cousins, Tyson Feist and William Irvine were the Rockets scratches.

Kelowna will be back in action when they host the Kamloops Blazers at Prospera Place at 7:05 p.m. PT on Tuesday, March 30, 2021.