Rocket Recap: Hitmen rally to knock off Rockets in overtime 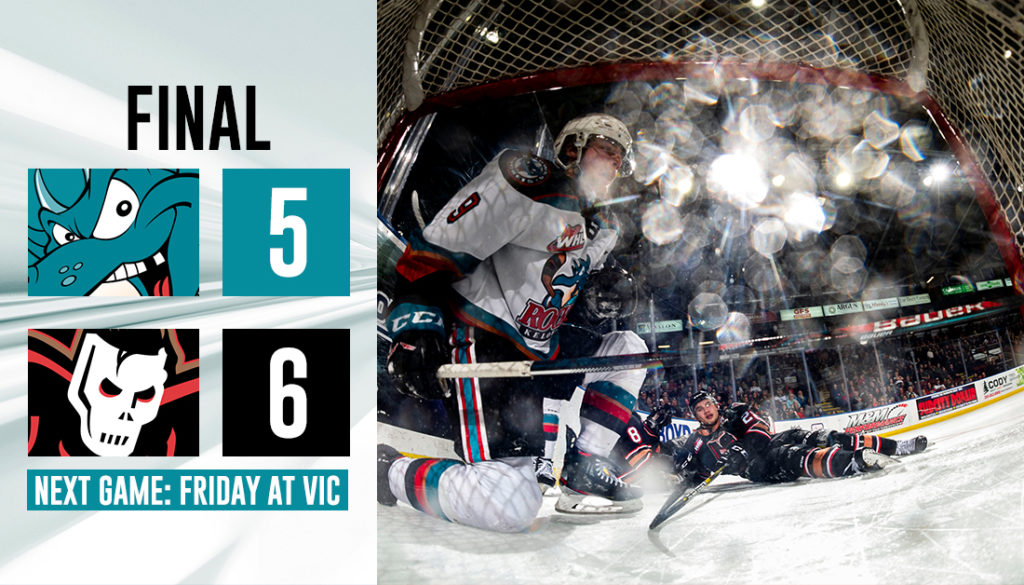 The Calgary Hitmen scored five straight goals to comeback and defeat the Kelowna Rockets 6-5 in overtime on Monday evening at Prospera Place.

Kelowna opened the scoring in the second period, holding a 5-1 lead after forty minutes of play. The Hitmen rallied off four straight goals in the third to tie up the game and another in overtime to skate away with the victory.

Captain Nolan Foote made his return to the lineup from a lower-body injury but left after the first period. Rockets president and general manager Bruce Hamilton provided an update on Foote’s status following the game.

“He was told to step out if he was sore and he did,” said Hamilton. “After the trade occurred yesterday, the agent for Nolan contacted New Jersey about where Foote was at and if he was cleared to play. We were following the Tampa Bay protocol, which was when he felt comfortable to be back and have a week of skating and two days of contact and then on restricted play. Permission was given by New Jersey’s general manager today, because of the trade occurring last night, we didn’t know where we were at. In our mind, everything was going to start over, but it stayed the same. We’ll find out more from New Jersey this week.”

Conner McDonald (5) got the Rockets on the board first, banking a shot in off of a Hitmen defender just past the midway point of the second period. Matthew Wedman (16) lifted the Rockets to a 2-0 lead 1:11 later, but Riley Fiddler-Schultz (8) cut the lead in half. Alex Swetlikoff (12) restored the two-goal lead with a power-play marker. Ethan Ernst (4) and Dillon Hamaliuk (11) pushed the Rockets to a 5-1 lead before the end of the second period.

Kyle Olson and Carson Focht both netted a pair of goals in the third period to force overtime.

Josh Prokop (15) completed the comeback for Calgary 2:31 into overtime.

The Rockets were 1-for-4 with the power play, while the Hitmen went 1-for-5 with the man advantage.

Roman Basran stopped 32 of the 38 shots fired on him. Calgary outshot Kelowna 38-29.

The Rockets will now head off to the island to take on the Victoria Royals in back-to-back games on Friday and Saturday night.