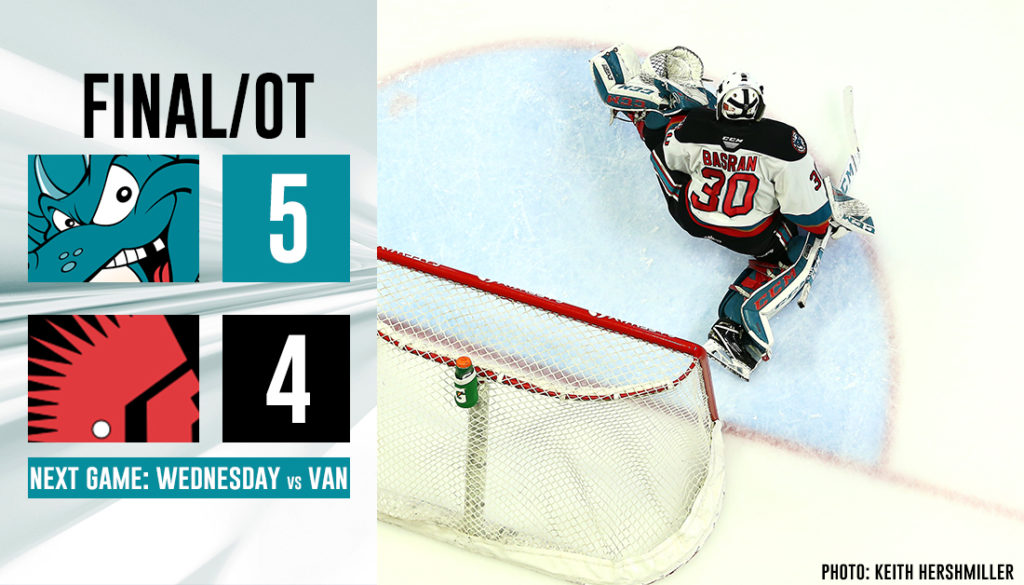 The Kelowna Rockets finished off their prairie road trip with a 5-4 overtime victory over the Moose Jaw Warriors on Saturday night at Mosaic Place in Moose Jaw, Sask.

Alex Swetlikoff, Michael Farren, Pavel Novak, and Kaedan Korczak (2) all found the back of the net for Kelowna.

The Rockets were without Sean Comrie, the defenceman is sidelined indefinitely after suffering a separated shoulder in last night’s game against the Regina Pats.

Alex Swetlikoff (8) opened the scoring with a power-play goal, jumping on Michael Farren’s rebound that kicked out to him. Former Rocket, Kobe Mohr (4) tied the game up at one 1:26 later. Just under a minute later Brayden Tracey (13) put the Warriors ahead with a power-play marker.

Michael Farren (5) evened up the game with the Rockets second power-play goal of the game five minutes into the third period. Denton Mateychuk (1) responded for the Warriors a minute later with his first Western Hockey League goal. Kaedan Korczak (4) went coast to coast to tie up the game with a short-handed tally. Kaedan’s younger brother, Ryder Korczak (9), inched the Warriors in front once again. Pavel Novak (12) scored his second goal in as many nights to tie the game at four.

Kaedan Korczak (5) charged up the right side and wired a wrister past Adam Evanoff 31 seconds into overtime to lift the Rockets to victory with his second goal on the night.

The Rockets were 2-for-7 on the power play, while the Warriors were 1-for-5 with the man advantage.

The Rockets will return home to host the Vancouver Giants on Wednesday for the Winmar Hockey and Winter Gear Drive. Fans are asked to bring new or used mittens, toques, gloves, jackets and hockey gear to donate. Tickets are on sale at selectyourtickets.com, at the Prospera Place box office or by phone at 250-762-5050.