Rocket Recap: Kelowna battles back to pick up single point in overtime 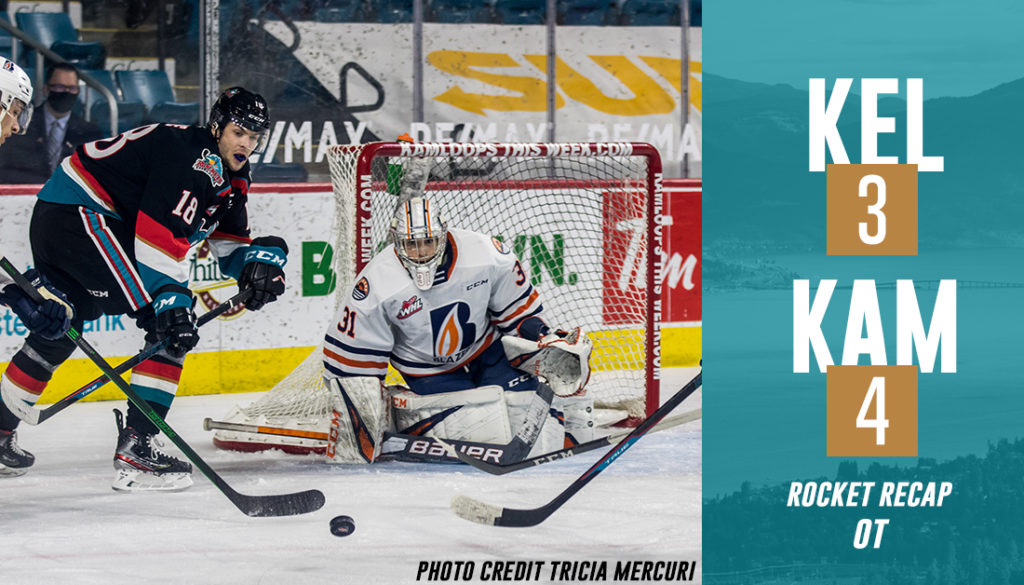 The Kelowna Rockets five-game win streak came to an end on Saturday night with a 4-3 overtime loss to the Kamloops Blazers at the Sandman Centre in Kamloops BC.

Down by two in the second, the Rockets battled back to tie it up in the middle frame. Kamloops pulled ahead in the third, but Kelowna forced overtime.

Rockets overage David Kope continued his dominant play, picking up a pair of goals and an assist.

Caedan Bankier (6) put the Blazers on the board first with a power play goal 3:45 into the second. Josh Pillar (9) tallied a shorthanded goal to put Kamloops up by two. David Kope (4) responded for the Rockets minutes later, tapping in a rebound while on the power play. Alex Swetlikoff (4) tied it up with the Rockets second power play goal of the game.

Bankier (8) completed the hat trick with 12 seconds to go in overtime.

Tonight's @barknflyonline stars and stats from our OT loss to the Blazers pic.twitter.com/U5XX9gB5Uk

Rockets goaltender Roman Basran stopped 30 of the  34 shots fired on him, while New York Rangers prospect Dylan Garand stopped 35 of 38.

Kelowna’s power play was two-for-five on the night, the Blazers were two-for-six with the man advantage.

Kamloops was without captain Connor Zary, who was out with an injury. The Blazers were also without NHL draft-eligible Logan Stankoven, he is away representing Canada at the U18’s.

The Rockets are off until Tuesday when they’ll host the Prince George Cougars at Prospera Place, puck drop is set for 7:05 p.m.