THE WESTERN HOCKEY LEAGUE HAS ANNOUNCED ITS RETURN TO PLAY PROTOCOL FOR THE 2020-21 SEASON, CLICK HERE TO LEARN MORE
THE ROCKETS ONLINE STORE AND STORE IN PROSPERA PLACE ARE TEMPORARILY CLOSED
October 23, 2019 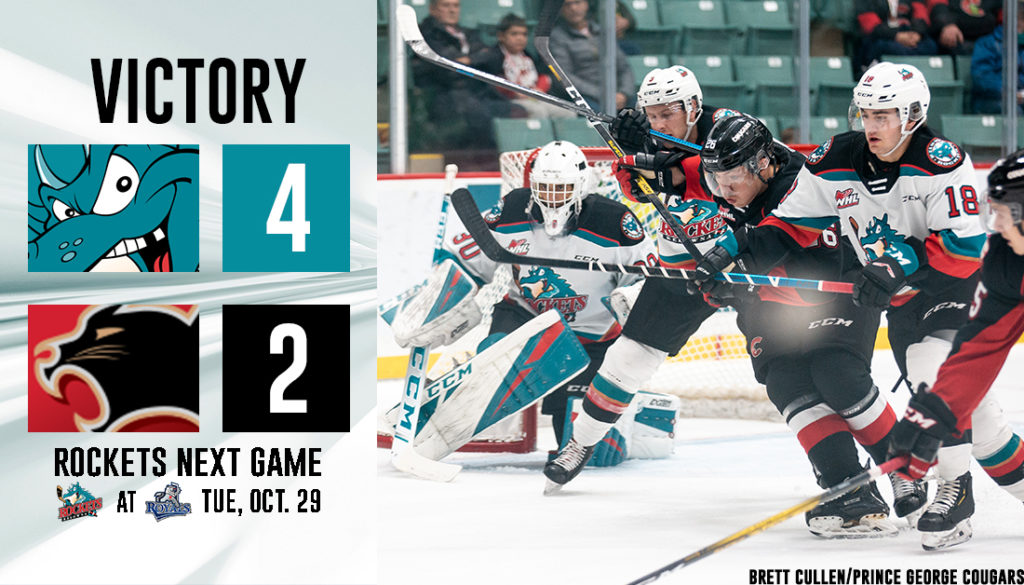 The Kelowna Rockets defeated the Prince George Cougars 4-2 Wednesday night at the CN Centre in Prince George, BC.

Captain Nolan Foote lead the way for the Rockets with a goal and two assists, picking up the first star of the night.

Trevor Wong (2) opened the scoring just before the midway point of the first period with a backhand on the power play.  Leif Mattson (1) charged up the ice towards the Cougars net 1:27 after Wong’s goal, throwing his hands in the air to celebrate what he thought was a goal. The referees reviewed the play and determined that Mattson was correct, giving the Rockets a 2-0 lead. Ilijah Colina (1) cut Kelowna’s lead in half in the final minute of the opening frame with a power-play goal.

Josh Maser (6) tied the game 1:39 into the second period with the Cougars second power-play goal of the night. Liam Kindree (4) restored the Rockets lead with the team’s first short-handed goal of the season.

With under three minutes to go in the game, Foote (7) found the back of the net to put the game out of reach.

Kelowna will be back in action next weekend they head to Victoria for games against the Royals on Tuesday, October 29 and Wednesday, October 30.