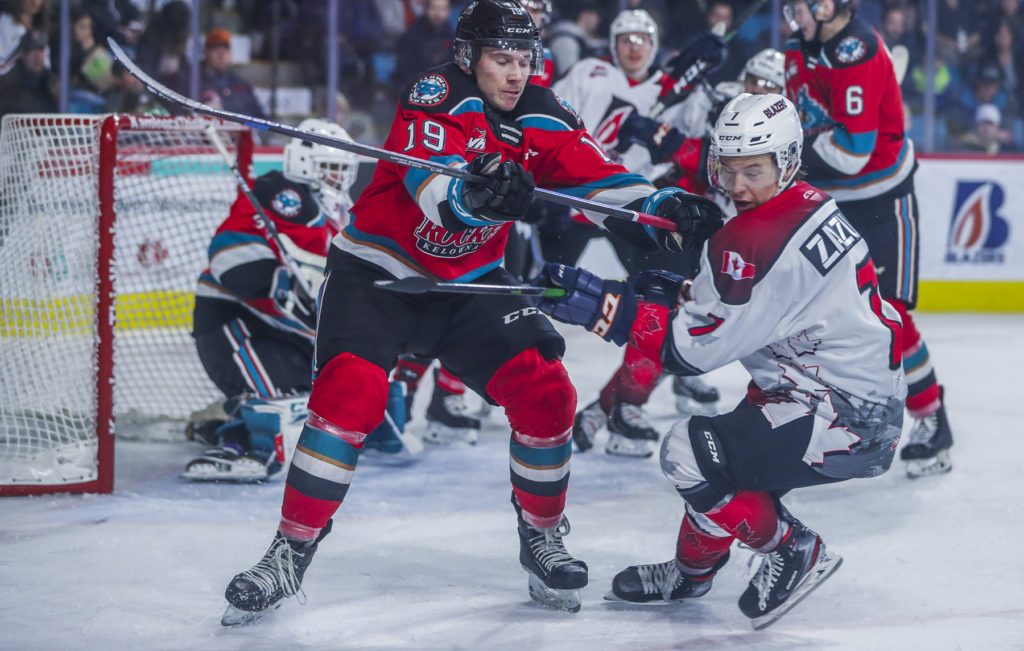 The Kelowna Rockets were downed by the Kamloops Blazers 5-2 Monday evening at the Sandman Centre in Kamloops, B.C.

With a Rocket sitting in the penalty box, Orrin Centazzo (10) was standing at the backdoor to beat Rockets starter Cole Schwebius. The Blazers held a 1-0 lead after twenty minutes.

Matthew Seminoff (1) scored a four on four goal to extend the Blazers lead to 2-0 early in the second period.  Nolan Foote (10) brought the Rockets within one when he tipped Kaedan Korczak’s shot past Blazers netminder Dylan Garand. Following the Rockets goal, Roman Basran replaced Schwebius in net for Kelowna. Connor Zary (13) and Ryley Appelt (2) scored goals 54 seconds apart to put Kamloops up 4-1. Before the end of the period, Pavel Novak was assessed a five minute major and a game misconduct for a check from behind.

With the power play carrying over into the third, Centazzo (11) netted his second of the game. Mark Liwiski (3) made a power move to the Blazers net, the referees reviewed the play and deemed it a good goal. The Blazers were able to hold off the Rockets in the final minutes to claim a 5-2 win.

Nolan Foote, Dillon Hamaliuk and Kaedan Korczak will now depart to play for Team WHL at 2019 CIBC Canada Russia Series on November 13 and 14 in Saskatoon and Prince Albert, Sask.

The Rockets will be back in action this Saturday when they host the Blazers for the Wawanesa Toy Drive in Support of The Salvation Army Kelowna.  Bring a new and unwrapped toy, and you’ll have a chance to be at the CHL Memorial Cup 2020 Presented by Kia!

Tickets for Saturday’s game are on sale at selectyourtickets.com, at the Prospera Place box office or by phone at 250-762-5050.