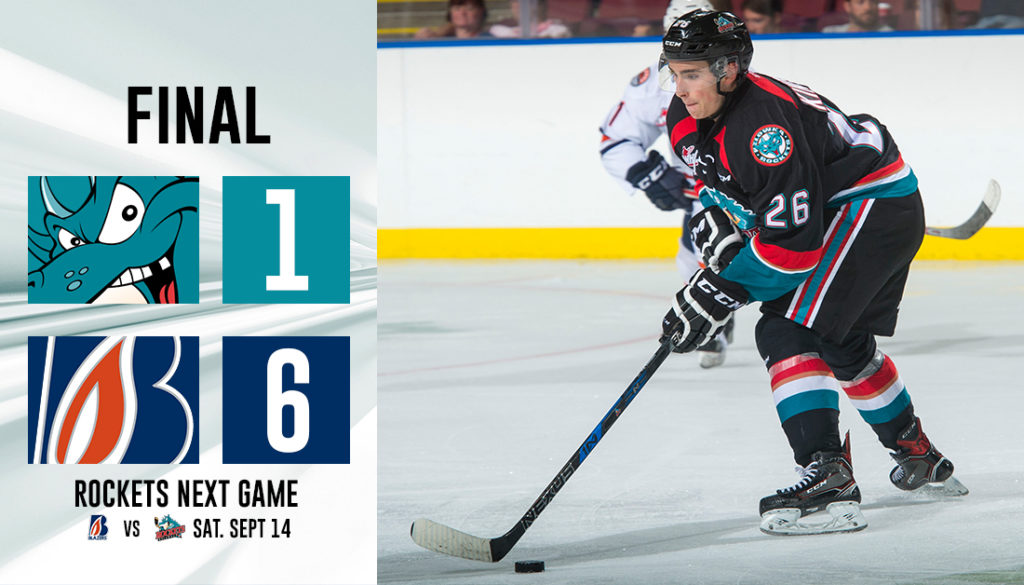 The Kelowna Rockets fell to the Kamloops Blazers 6-1 Friday night at the Sandman Centre in Kamloops BC.

The Rockets lineup was without Jake Lee, Kyle Topping and Leif Mattson. The trio arrived in Kelowna yesterday after being away at NHL rookie tournaments. Nolan Foote (Tampa Bay), Dillon Hamaliuk (San Jose), Kaedan Korczak (Vegas) and Sean Comrie (Philadelphia) are still out of town, they advanced to main camps with NHL squads.

Defenceman Carson Sass made his debut with Kelowna after being acquired in a trade from the Tri-City Americans on Wednesday.

Inaki Baragano (2) put the Blazers ahead of the Rockets 14:12 into the game when he beat Rockets goaltender James Porter. Kamloops held a 1-0 lead after the first 20 minutes.

The Rockets found themselves in the box four times during the second period, but they were able to hold off a pressing Kamloops power play and maintain the one-goal deficit heading into the final frame.

Logan Stankoven (6) made it a two-goal lead for the Blazers just 25 seconds into the third period. The Blazers offence then ignited with three straight goals in less than four minutes. Connor Zary (4), Zane Franklin (5), and Josh Pillar (2) all found the back of the net to make it 5-0 for Kamloops. Stankoven (7) netted his second of the night while on the power play with just under five minutes to play in the game. In the final minutes of the game Liam Kindree (2) got the Rockets on the board and broke Blazers netminder Dylan Garand’s bid for a shutout.

The Rockets will return home to Prospera Place tomorrow night when they host the Blazers for their final preseason game at 7:05. Tickets are on sale at selectyourtickets.com, at the Prospera Place box office or by phone at 250-762-5050.