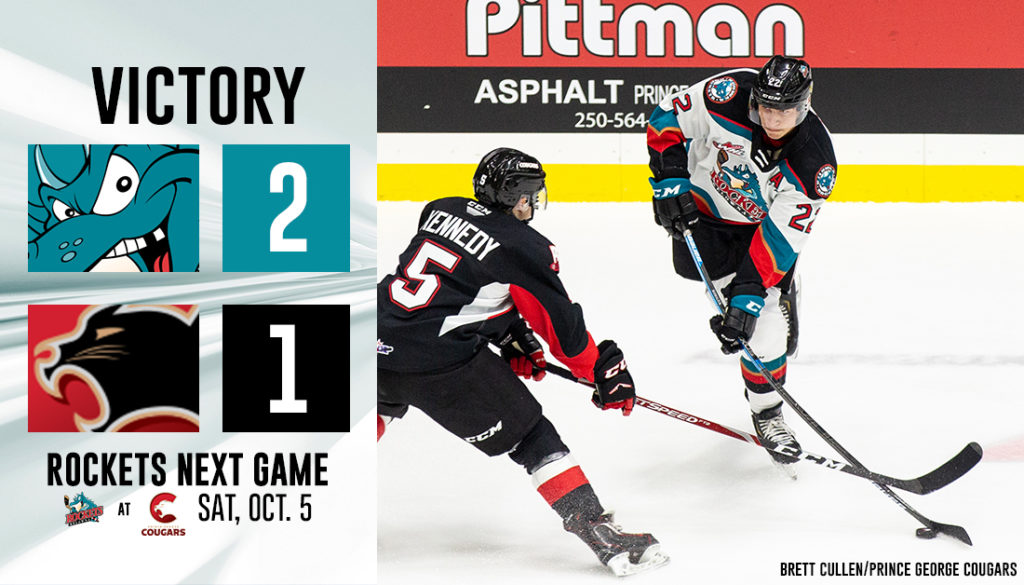 The Kelowna Rockets picked up their first road victory of the season with a 2-1 victory over the Prince Geroge Cougars Friday night at the CN Centre in Prince Geroge, BC.

Pavel Novak played the role of hero for the Rockets netting both goals, while netminder Roman Basran had to step up to the plate multiple times.

The Mayor says no. pic.twitter.com/RyzAt4MNk1

Liam Kindree dished a pass from behind the net to Novak (2) who was waiting on the doorstep to get the Rockets on the board just under five minutes into the game.

The Rockets power play finally hit the ice for the first time in the third period, Trevor Wong came close to extending the Rockets lead, but Cougars goaltender Taylor Gauthier denied the rookie. Prince George headed back to the box 12 seconds after returning to five on five, but once again the Rockets were unable to increase their lead.

The Cougars tied up the game just after the midway point of the period while on their fourth power play of the night. Basran made the initial save on a Tyson Upper one-timer, but Josh Maser (1) was waiting right in front of the Rockets net for the rebound.

While down a man with just under five to go, Novak raced up the wing and drew a holding penalty. Once Nolan Foote stepped out of the box Kelowna had 29 seconds of power play time to work with. Novak (3) took full advantage, he fired a wrist shot from the top of the left circle that went off of a Cougar and into the net to give the Rockets a 2-1 lead.

Roman Basran stopped 27 of 28 shots he faced to pick up his fourth win of the season. Kelowna was outshot by the Cougars 29-21; they were outshot 7-3 in the opening period and 15-6 during the second frame.

Here are the @Trufrozen three stars for tonight.

The Rockets will face Prince Geroge again tomorrow at the CN Centre, puck drop is set for 7:00 pm.  You can listen to the game on AM 1150, watch on WHL Live or follow the Rockets Twitter for live updates.