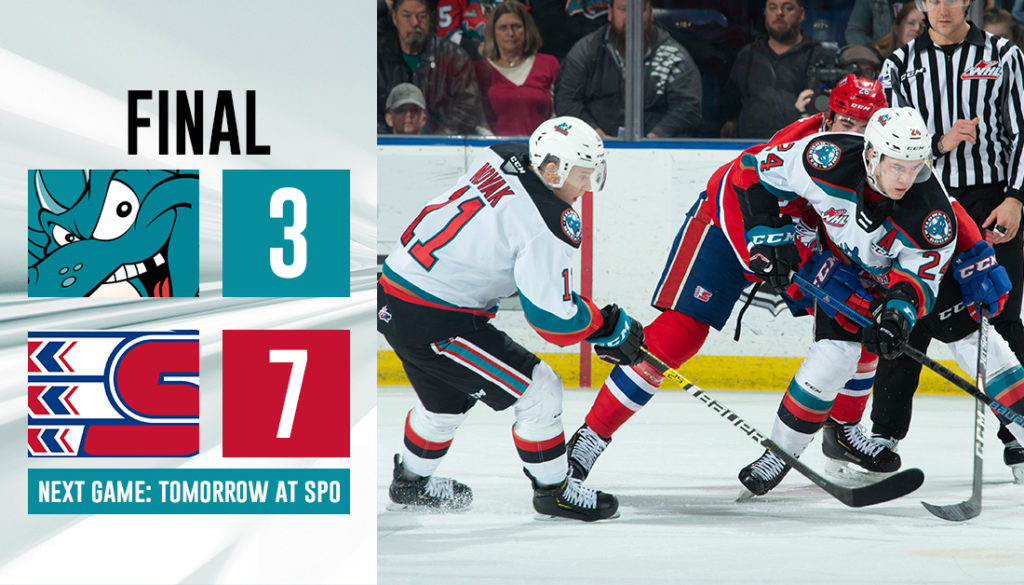 The Kelowna Rockets fell to the Spokane Chiefs 7-3 on Friday night at Prospera Place.

The Chiefs jumped out to a three-goal lead before the game was six minutes old, Kelowna crawled back to within one before Spokane pulled away with the game.

“We started slow for sure,” said head coach Adam Foote following the game. “We were bad right from the net through. You can’t come on home ice and have the mental errors and not be ready to play like we did.”

You can watch Foote’s entire postgame scrum by clicking here.

Kelowna product Jack Finley (11) opened the scoring for Spokane 1:25 into the game with a power-play tally. Brad Ginnell (13) and Luke Toporowski (16) extended the Chiefs lead just over five minutes into the game. Following the third goal, Roman Basran was replaced in the Rockets net by Cole Schwebius. Kyle Topping (6) and Pavel Novak (18) brought the Rockets within one with back to back power-play goals. Adam Beckman (35) restored the two-goal lead for the Chiefs. The Rockets got one back, but it was waived off due to too many men. The Chiefs held a 4-2 lead following the opening twenty minutes.

Alex Swetlikoff (11) made a power move in front of the Chiefs net to get the Rockets back within one just before the midway point of the second period. Bear Hughes (15) and Michael King (10) both scored for Spokane in the second period.

Finley (12) found the back of the net once again in the third period while on the power play.

Turner McMillen, the son of former Tacoma Rocket captain Dave McMillen, made his WHL debut. The Rockets drafted Turner during the ninth round (No. 191) at the 2018 WHL Bantam Draft.

Kelowna was without Nolan Foote (lower body/week to week), Liam Kindree (upper body) and Michael Farren (upper body/day to day). Devin Steffler was the other scratch for the Rockets.

The Rockets were two-for-six on the power play, while the Chiefs were three-for-six with the man advantage.

Basran made four saves on seven shots before being replaced in net 5:17 into the game. Schwebius turned aside 19 of the 23 shots fired on him. Spokane outshot Kelowna 38-27.

Minnesota Wild prospect Adam Beckman picked up a goal and three assists en route to being named the Tru Frozen Yogurt first star of the game. Kaedan Korczak, the third start of the game, had an assist on all three Rockets goals.

The two will meet again tomorrow in Spokane where they’ll wrap up the season series, puck drop is set for 7:05 p.m.