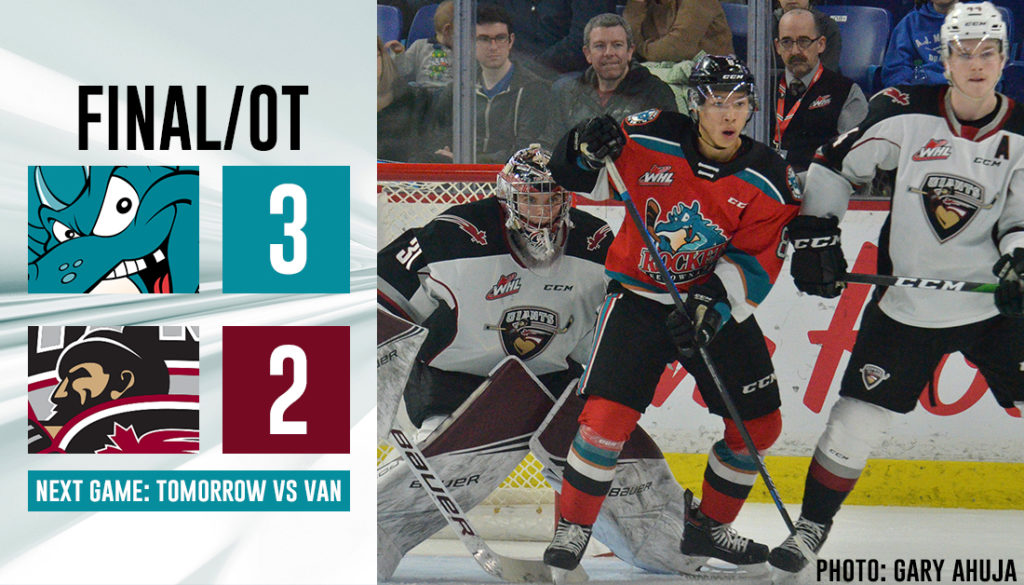 The Kelowna Rockets made it back-to-back wins with a 3-2 overtime victory over the Vancouver Giants on Saturday night at the Langley Events Centre.

For the second night in a row, overtime was needed for the Rockets to pick up the win. Defenceman Kaedan Korczak found the back of the net with a power-play bomb to secure the Rockets 23rd win of the season. Goaltender Roman Basran made his return from the injured reserve, stopping 30 of 32 shots, to pick up his 17th win of the campaign.

Matthew Wedman (12) got the Rockets on the board first. Cutting to the top of the slot, he charged in drawing a hooking penalty, but it wasn’t needed as he fired a shot past Giants netminder Trent Miner.

Overage forwards Milos Roman (14), and Tyler Preziuso (17) scored back-to-back power-play goals 2:21 apart to launch the Giants ahead of the Rockets in the second period.

Jonas Peterek (12) redirected Kyle Topping’s pass to tie up the game 11 minutes into the third period.

Give Topping time and space, he’ll make ya pay.

Tristen Nielsen delivered a late hit on Mark Liwiski late in the period, he was given a five minute major for interference and a game misconduct. The Rockets carried the man advantage into overtime. Trevor Wong teed up Kaedan Korczak (8) with a one-timer that he launched into the Giants net 1:58 into extra time.

Kelowna was 1-for-3 on the man advantage, while Vancouver went 2-for-4 on the power play.

The Rockets outshot the Giants 33-32.

Kelowna will be back in action tomorrow when they host the Vancouver Giants for a rare Sunday matchup at Prospera Place; puck drop is set for 5:05 p.m. Tickets are on sale at selectyourtickets.com, at the Prospera Place box office or by phone at 250-762-5050.