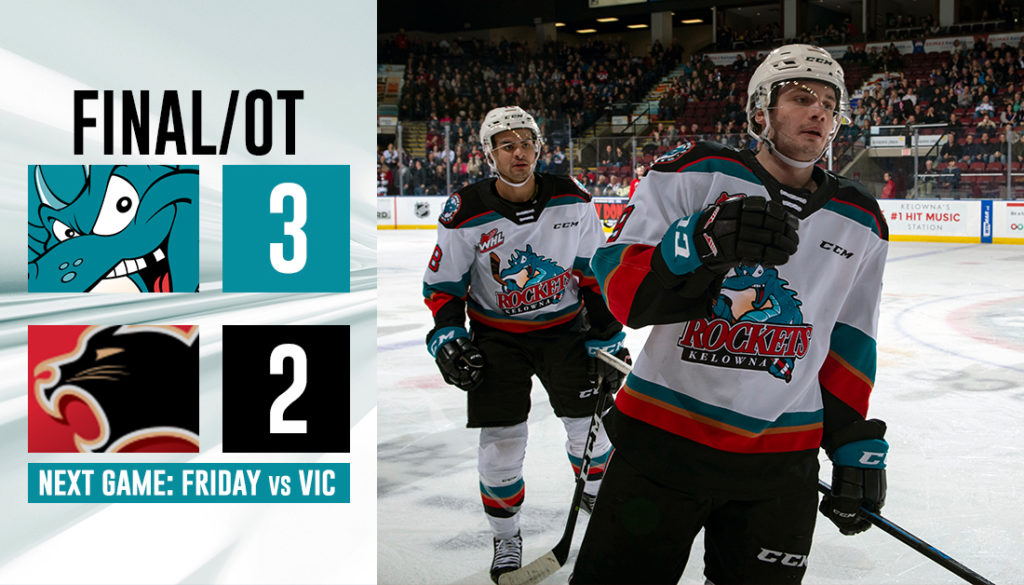 The Kelowna Rockets capped off 2019 with a 3-2 overtime victory over the Prince George Cougars courtesy of Liam Kindree on Monday night at Prospera Place.

The Rockets held a two-goal advantage just past the midway point of the opening period, but the Cougars stormed back to force overtime against their B.C. Division rivals.

With Mark Liwiski providing the screen in front of Cougars netminder Taylor Gauthier, Kaedan Korczak (6) put the Rockets on the board first with a power-play slap shot. Liwiski (5) made it a two-goal lead 1:37 later, he chipped the puck past a Cougar defender at centre ice and took off, beating Gauthier glove side. Cole Moberg (5) brought Prince George within one with 52 seconds to go in the first period.

Connor Bowie (7) pounced on a rebound while shorthanded to score the lone goal of the middle frame.

Matthew Wedman went down in the third period after colliding with Reid Perepeluk, Perepeluk was assessed a five minute major for kneeing and a game misconduct. Wedman returned to action during the ensuing power play, but the Rockets were unable to capitalize.

With time ticking away in overtime and fans counting down the seconds, Liam Kindree (7) danced his way around the offensive zone shaking off a Cougars defender to fire home the game-winner with 3.4 seconds left on the clock.

Turn up your 🔊 for this one folks pic.twitter.com/Dol0xkA3v9

Here are the @Trufrozen Three Stars for the final game of 2019: pic.twitter.com/PST0KtTCGq

Captain Nolan Foote is still away at the World Juniors, Foote and Team Canada will be back in action tomorrow when they take on the host Czechs in the preliminary-round finale (1 p.m. ET/10 a.m. PT).

The Rockets are off until Friday night when the Victoria Royals make a trip to Prospera Place. Tickets are on sale at selectyourtickets.com, at the Prospera Place box office or by phone at 250-762-5050.

Statement from the Canadian Hockey League
7 days ago