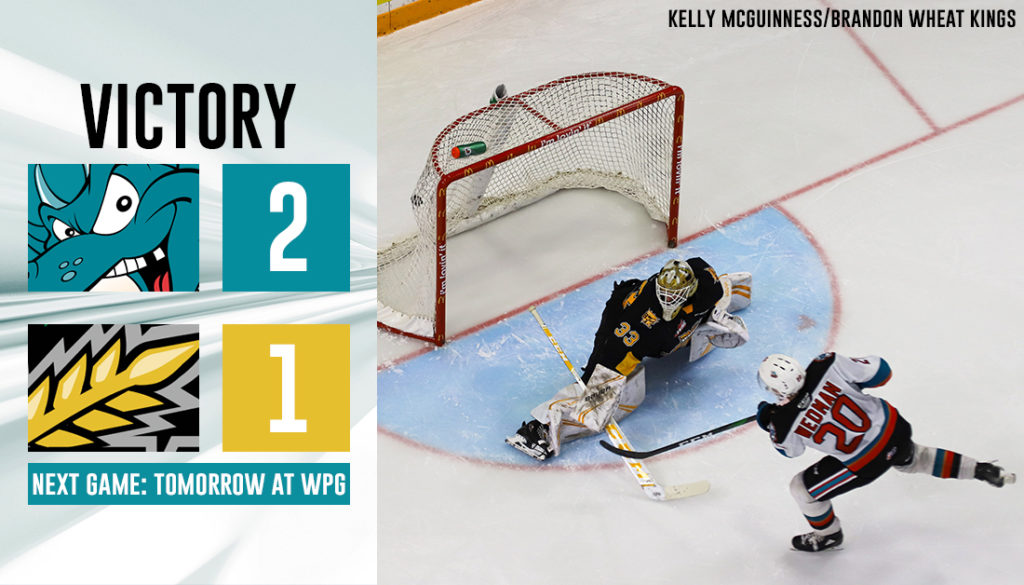 The Kelowna Rockets extended their win and point streaks on Tuesday night with a 2-1 shootout victory over the Brandon Wheat Kings at Westoba Place in Bandon, MB.

For the second straight game, a shootout was needed to determine a winner. Matthew Wedman sealed the deal for the Rockets with the lone goal in the skills competition, while starter Roman Basran turned aside 33 shots en route to picking up his 13th victory of the season.

The Rockets have now won four straight games, including the first three games of their prairie road swing. Kelowna has at least a point in their last nine games, the lone loss coming in the shootout against the Edmonton Oil Kings back on November 26.

Wedman (7) opened the scoring while on the power play with his first as a Rocket. The 20-year-old tipped Pavel Novak’s shot into the net with 15 seconds left to play in the first period.

We’ve got a birds-eye view of Matty’s tip for ya. pic.twitter.com/HzQNOgIiuN

Brandon answered in the middle frame with a power-play goal from Ridly Greig (9).

It's so cold in Manitoba that @m_weds has ice in his veins! #FlaPanthers https://t.co/KVDnFf6cj1 pic.twitter.com/ALCTYVqaFE

The Rockets went 1-for-4 on the power play, while the Wheat Kings were 1-for-3 with the man advantage.

The Rockets road trip will continue tomorrow night in Winnipeg against the ICE, puck drop is set for 5:30 pm PST.