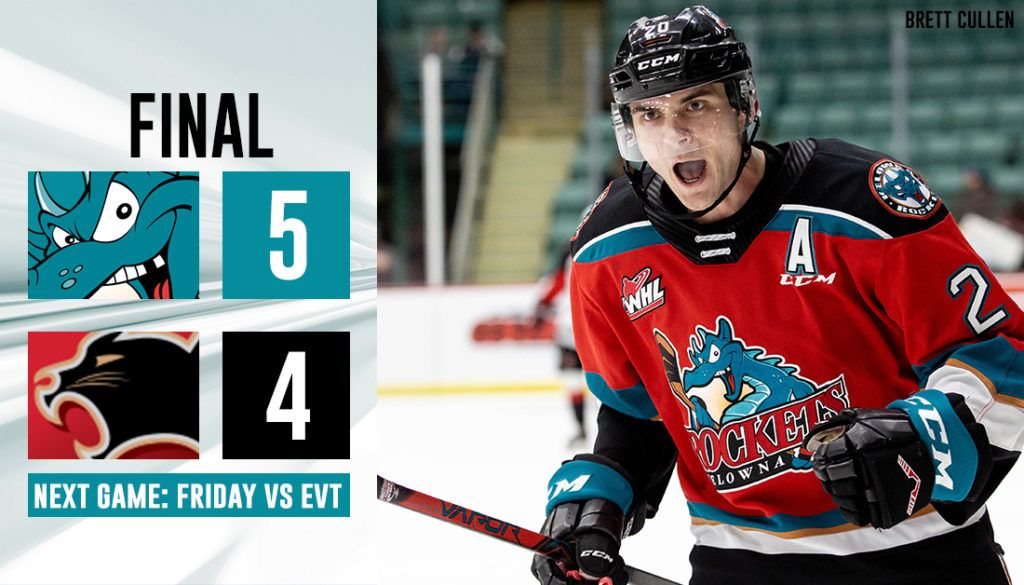 The Kelowna Rockets came from behind in the third period to tame the Prince George Cougars 5-4 at the CN Centre in Prince George on Wednesday night.

Wrapping up their four-game road trip, Kelowna picked up seven out of a possible eight points.

The Rockets headed into the final frame down 3-1. Matthew Wedman stepped up for the Rockets in the 5:23 of the game to score back-to-back goals and lift the Rockets to their 27th win of the season.

Rockets defenceman Tyson Feist’s (2) shot through traffic opened the scoring 2:22 into the game, but Vladislav Mikhalchuk (10) responded for the Cougars. Dillon Hamaliuk (15) tapped in the go-ahead goal to pick up his ninth point in his last five games. Cougar Connor Bowie (12) found the back of the Rockets net with under a minute to go.

Cole Moberg (11) gave Prince George their first lead of the game early in the middle frame while on the power play with the lone tally of the period.

Kyle Topping (11) tied things up 1:12 into the final frame. With his second of the night, Moberg (12) pushed the Cougars ahead once again. Rockets assistant captain Matthew Wedman (18) scored back-to-back goals 2:17 apart to tie the game and give the Rockets the win.

Rockets netminder Cole Schwebius turned aside 24 of 28 shots to pick up his seventh win of the season. Kelowna outshot Prince George 39-28.

The Rockets were 0-for-4 on the power play, while the Cougars were 1-for-2 with the man advantage.

It was Wedman’s 11th multipoint game of the season, the Florida Panthers prospect was named the first star of the game.

Kelowna will now return home to host the Everett Silvertips on Friday night at Prospera Place. Tickets are on sale at selectyourtickets.com, at the Prospera Place box office or by phone at 250-762-5050.