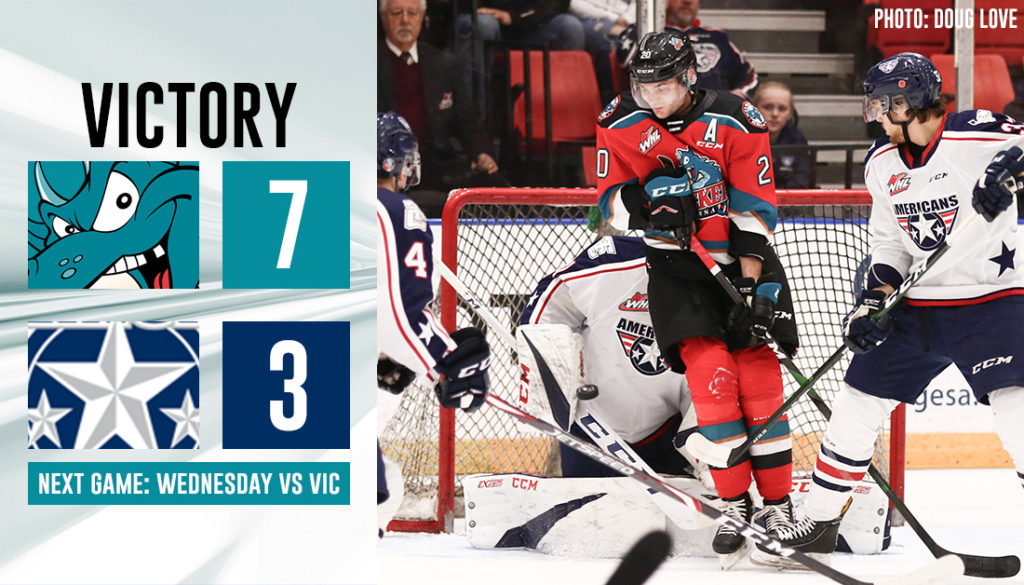 The Kelowna Rockets capped off their three-game weekend with a commanding 7-3 win over the Tri-City Americans Sunday night at the Toyota Center in Kennewick, WA.

Cole Schwebius turned aside 24 shots to backstop the Rockets to their 21st win of the season.

The Rockets got on the board first in the opening minutes of the second period with two goals in a span of 29 seconds from Michael Farren (6) and Trevor Wong (4). Colorado Avalanche prospect Sasha Mutala (12) cut the Rockets lead in half just before the midway point of the period. Jake Poole (4) established the Rockets two-goal lead, affiliated player Steel Quiring picked up his first WHL point on the goal.

Steel Quiring picks up his first @TheWHL point on @Jake_poole21‘s fourth of the season. pic.twitter.com/kwi0q1E4Pa

Pavel Novak‘s (15) sharp-angled shot found the back of the net just 46 seconds into the third period. Novak (16) took off on a breakaway 3:15 after his first goal beating Talyn Boyko to collect his second of the night. Booker Daniel (4) and Samuel Huo (8) edged into the Rockets lead. Dillon Hamaliuk (9) and Conner McDonald (3) added to the Rockets lead in the final minutes of the game.

Kelowna will be back in action this Wednesday when they host the Victoria Royals for Hat-Trick Wednesday. Grab the Hat- Trick deal before 2:00 pm on Wednesday to get a hot dog and pop with your ticket for only $19.99, tickets are on sale at selectyourtickets.com, at the Prospera Place box office or by phone at 250-762-5050. Sunday’s contest against Tri-City will get underway at 4:05 pm.

Bring a donation of a non-perishable food item for the Kelowna Food Bank to attend the CIBC Family Skate next Sunday, January 12, 2020, from 1:30 PM to 3:00 PM at Prospera Place. The entire Rockets team and Memorial Cup will be on hand to take photos. Please note: There will be no skate rentals or skate sharpening on site.