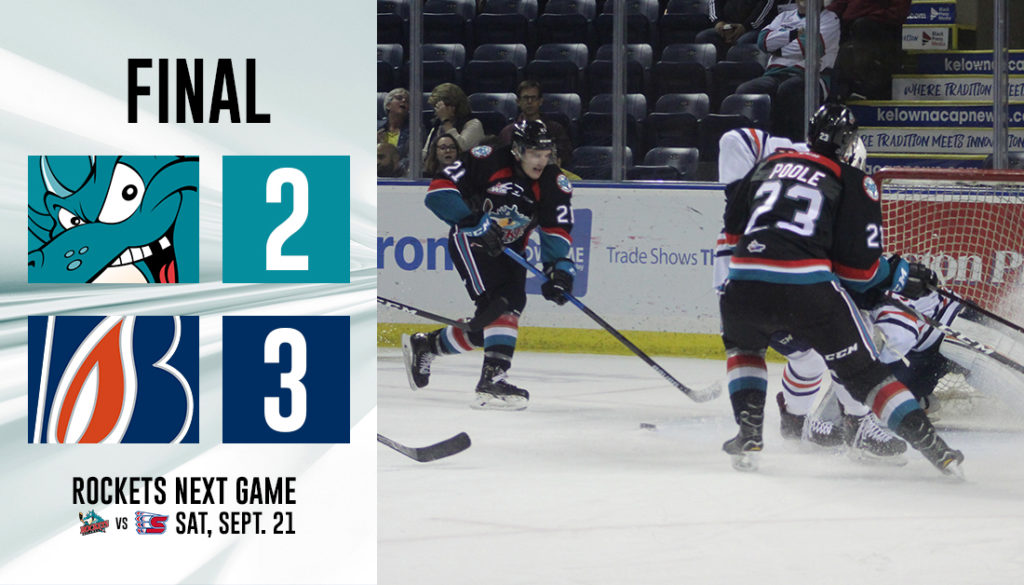 The Kelowna Rockets staged a comeback but ultimately fell 3-2 to the Kamloops Blazers in a nine-round shootout Saturday night at Prospera Place in Kelowna, BC.

Leif Mattson and Kyle Topping returned to the Rockets lineup, while Jake Lee made his debut with Kelowna; the trio was away at NHL rookie tournaments. Nolan Foote (Tampa Bay), Kaedan Korczak (Vegas), Dillon Hamaliuk (San Jose), and Sean Comrie (Philadelphia) are still away at NHL training camps.

Logan Stankoven (8) put the Blazers on the board 8:17 into the game. While on the penalty kill, Orrin Centazzo (5) extended the lead with a shorthanded tally that he blasted past the blocker of Rockets starter Roman Basran. Kelowna cut the lead in half with 31 seconds left in the opening frame, Jake Poole set up Kyle Crosbie (4) while in on the two on one. The Rockets trailed 2-1 following the first period.

Pavel Novak (1) scored the lone goal of the second period. He tied the game with his first goal in a Rockets uniform, the Czech Republic product fired a pinball that found its way into the net.

Dylan Garand replaced Rayce Ramsay in the Kamloops net to start the third period.  The Rockets and Blazers exchanged power play chances in the final moments of the stanza, but they were both able to fend off the attack forcing overtime.

Kelowna’s best chance during three on three sudden death came when Mattson just missed the open net while in on an odd-man rush. Nine rounds in the shootout were needed to determine a winner, Blazer Brodi Stuart sealed the deal for Kamloops.

Basran turned aside 32 of the 34 shots fired his way during regulation, he stopped seven of the nine shots he faced during the shootout. The Rockets were outshot by the Blazers 34-28.

The Rockets will open their Memorial Cup season next Saturday against the Spokane Chiefs. The home opener will also be the Rockets tenth annual Canadian Cancer Society Pink in the Rink game.

Kelowna will wear pink jerseys that feature a special ten-year shoulder patch that will be up for auction with the money raised going to the CIBC Run for the Cure. Pink glow wristbands will be handed out to fans in attendance, they’re also encouraged to wear pink to the game, prizes will be up for grabs for people sporting pink. Tickets are on sale at selectyourtickets.com, at the Prospera Place box office or by phone at 250-762-5050.