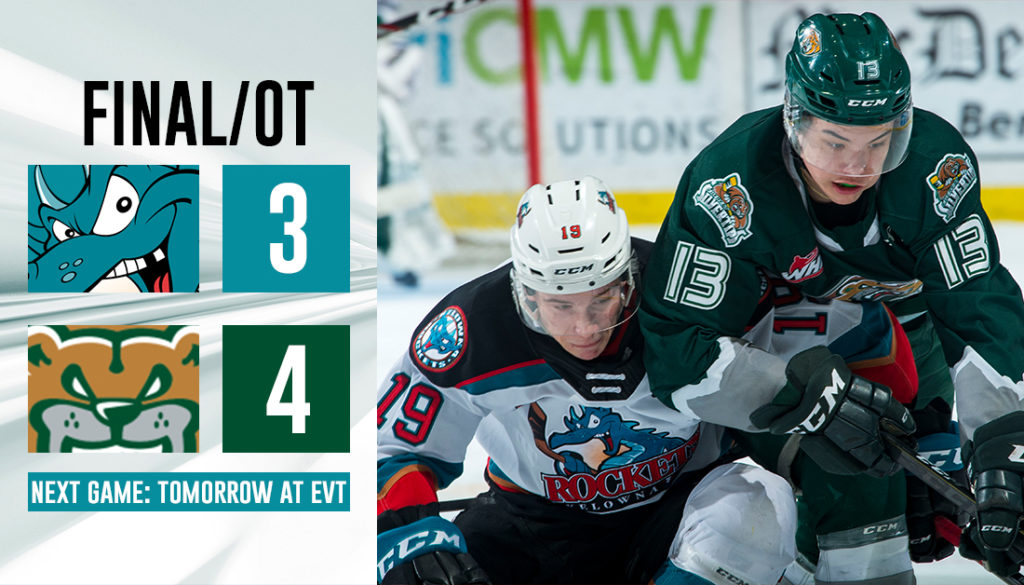 The Kelowna Rockets opened their home-and-home series against the Everett Silvertips with a 4-3 overtime loss on Friday night at Prospera Place.

The Rockets were down 3-1 heading into the third period but stagged a comeback with goals from Mark Liwiski and Conner McDonald. Everett fended off the Kelowna in extra time with a power-play goal.

With the loss coming in overtime, Kelowna’s point streak has been extended to five games since naming Kris Mallette the Rockets interim head coach. They’ve gone 3-0-1-1 in that span.

“We competed against a very good hockey team for sixty minutes,” said Mallette. “I mean, get a point out of it, obviously not the way you want to lose. I’m happy, the guys did a lot of really good things again and that’s a really good hockey club over there.

“Right now we’re just trying to find what our identity is and it’s been successful of late for us to be able to get the puck down low, crash and bang and score some goals in the blue paint. We want to have the puck all of the time and I thought our guys worked really, really hard to try and get it tonight and we created a lot of opportunity.”

Silvertip Gage Goncalves (32) scored the lone goal of the first period 2:55 into the game.

Elias Carmichael (2) tied up things in the second period finishing off a tic-tac-toe play. Justyn Gurney (6) pushed Everett ahead in the final minutes of the middle frame.

Michal Gut (13) made it a two-goal cushion for Everett in the third, but Mark Liwiski (8) responded for the Rockets just over a minute later. While on the power play in the final minute of the game, the Rockets pulled the goaltender for the extra attacker. Conner McDonald (6) capitalized on the six-on-four man advantage, launching a bomb past Dustin Wolf with 19.8 seconds left on the clock to force overtime.

The Rockets started overtime down a man, Kaedan Korczak was called for interference in the final seconds of regulation. The number one power play in the Western Hockey League took full advantage, just 49 seconds into extra time Bryce Kindopp (37) popped in a rebound past Rockets netminder Roman Basran.

The Rockets power play went 1-for-4 on the night, the Silvertips were 1-for-2 with the man advantage.

Basran turned aside 31 of 35 shots on the night, including a highlight-reel glove hand grab that earned him WHL Highlight of the Night honours. Everett outshot Kelowna 35-30.

“Basically it was all just reaction,” said Basran about the save. “Obviously I dropped before the shot or pass was made, and you know it was just one of those instinct things that happen once or twice a year.”

Kelowna will be back in action tomorrow when the rematch against Everett gets underway at 7:05 p.m. in Everett.