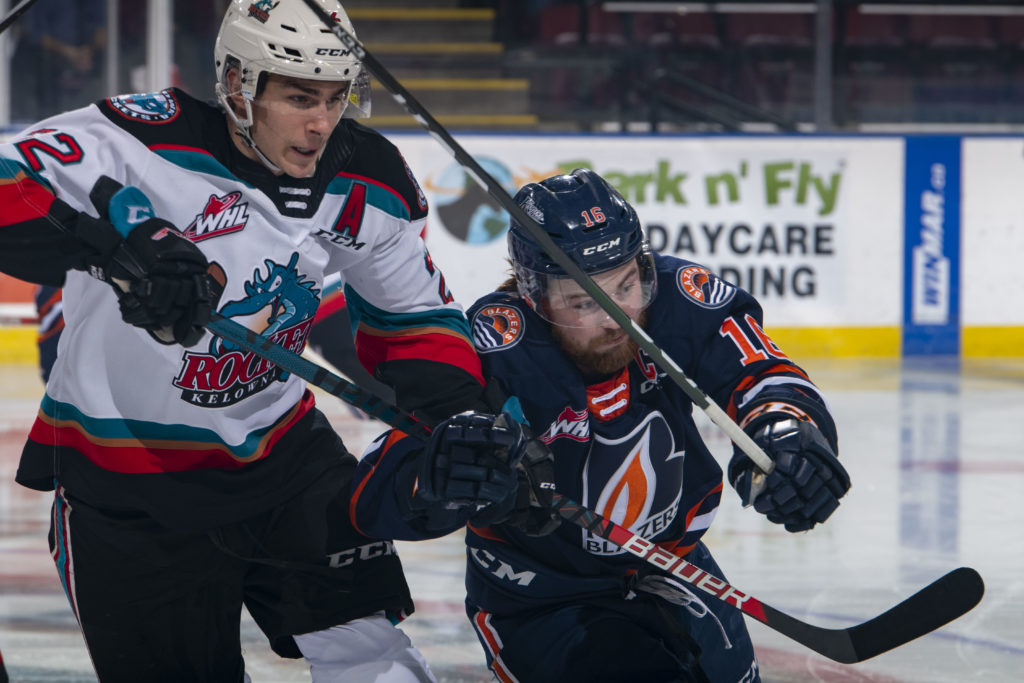 Please note: There are no post-game interviews tonight

The Kamloops Blazers downed the Kelowna Rockets 7-2 on Saturday night at Prospera Place.

With Trevor Wong and Nolan Foote out of the lineup, the Rockets called up 15-year-old Rilen Kovacevic to make his WHL debut. Rookie import forward Jonas Peterek made his debut as a Rocket as well, the 2001 born forward was acquired from the Calgary Hitmen ahead of yesterday’s trade deadline.

The Blazers league-leading penalty kill once again displayed why they sit at the top of the league with an 87.7% success rate, shutting down all three of the Rockets power play chances. Kamloops was 4-for-8 with the man advantage

It didn’t take long for Peterek (9) to find the back of the net as a Rocket, Conner McDonald found him in front of the Kamloops net 7:02 into the game. Orrin Centazzo (26) tied the game up just past the midway point of the period with a power-play tally. Josh Pillar (7) pulled the Blazers in front for the first time before the end of the period.

What a feed by CMAC

Connor Zary (25) jumped on a rebound during the power play to extend the lead to two early in the second period. Pavel Novak fed Alex Swetlikoff (9) at the backdoor to bring the Rockets within one. Zane Franklin (23) re-established the two-goal lead with while a pair of Rockets were sitting in the penalty box. Pillar (8) netted his second of the night 29 seconds later.

Roman Basran replaced Cole Schwebius in net for Kelowna to start the third period. Ryley Appelt (5) and Logan Stankoven (15) scored for Kamloops in the final frame. Schwebius returned to the Rockets net and Rayce Ramsay finished out the game for the Blazers after Basran and Kamloops netminder Dylan Garand fought.

Schwebius stopped 22 of 27 shots, Basran turned aside 14 of 15 shots fired his way during the final frame. The Blazers outshot the Rockets 43-25.

The two won’t again until March 13 in Kamloops.

The Rockets have the week off, they’ll be back in action on Friday night when they head out on the road to visit the Silvertips.

Bring a donation of a non-perishable food item for the Kelowna Food Bank to attend the CIBC Family Skate Sunday, January 12, 2020, from 1:30 PM to 3:00 PM at Prospera Place. The entire Rockets team and Memorial Cup will be on hand to take photos. Please note: There will be no skate rentals or skate sharpening on site