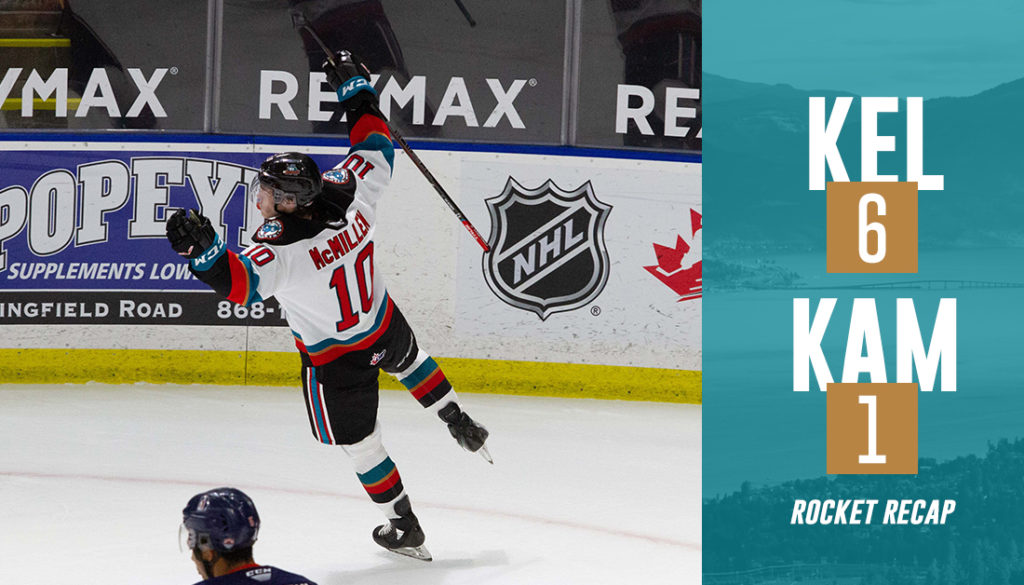 The Kelowna Rockets extended their win streak to five games with a commanding 6-1 win over the BC Division leading Kamloops Blazers on Friday night at Prospera Place.

Kelowna took off in the opening period, firing five goals past netminder Dylan Garand through the opening twenty minutes of action. Rockets netminder Cole Schwebius picked up his fourth win of the season, stopping 31 of the 32 shots fired on him.

Elias Carmichael (2), Dylan Wightman (4), Dillon Hamaliuk (5), Turner McMillen (2) and Jake Poole (2) all scored for Kelowna within a span of 6:38 in the final half of the first period.

Daylan Kuefler (3) broke Schwebius’ shutout bid 11:02 into the third period with a short-handed goal. In the final 60 seconds of the game, rookie forward Nolan Flamand (1) recorded his first WHL goal, beating Garand with a wrist shot while on the power play.

Dylan Garand turned aside 28 of the 34 shots fired on him.

Kamloops was without captain Connor Zary, who was out with an injury. The Blazers were also without NHL draft-eligible Logan Stankoven, he is away representing Canada at the U18’s.

Kelowna will head to Kamloops tomorrow to take on the Blazers again, puck drop is set for 7:05 P.M.