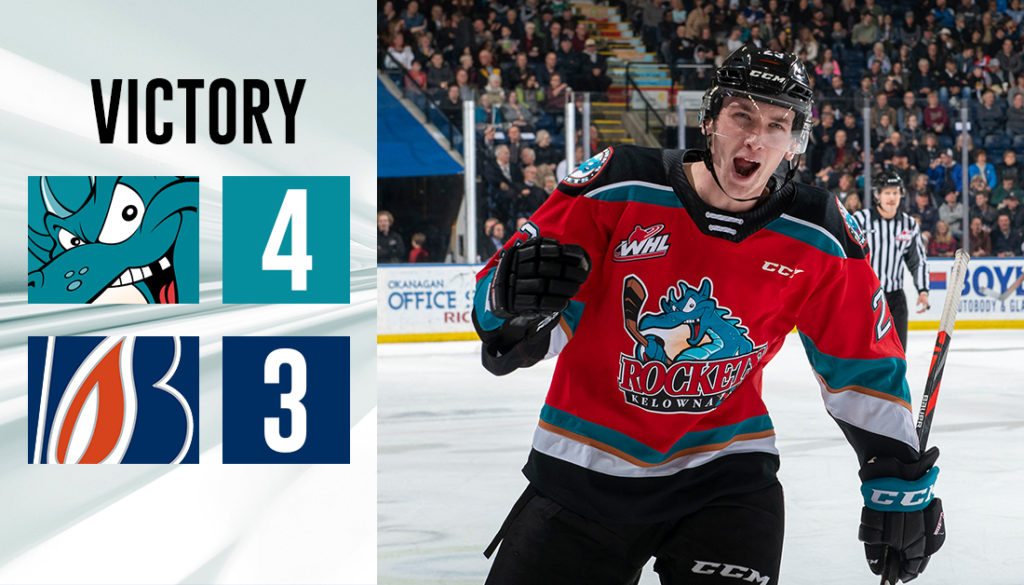 The Kelowna Rockets snapped their four-game losing streak with a 4-3 victory over the Kamloops Blazers at Prospera Place Saturday night.

Off the ice was also a success tonight, fans donated 500 toys and $2,057.40 in cash to the Wawanesa Toy Drive for the Kelowna Salvation Army.

HUGE THANKS to @wawanesacanada and the @kelownarocketswhl for the toy drive during tonight’s game! 500 toys and $2,057.40 in cash were donated to our Sharing Christmas program helping families in need this Christmas season! #GivingHopeToday #GoRockets

Logan Stankoven (5) opened the scoring 8:35 into the first period with a power-play goal, giving the Blazers a 1-0 lead.  Jake Poole (3) deflected the puck with one hand past Kamloops netminder Dylan Garand to tie up the game. Dillon Hamaliuk (6) put the Rockets ahead 1:16 after Poole’s goal. Ryan Hughes (8) responded for the Blazers just before the end of the period.

One-handed, not a big deal.

Kyle Crosbie (1) cashed in on a feed from Leif Mattson while in on a two on one, but Orrin Centazzo (12) once again tied the game during the second period. The two remained tied after 40 minutes of play.

Alex Swetlikoff (6) slid the game-winner under Garand’s pad on his backhand to lift the Rockets to victory.

Kelowna will be back in action on Wednesday night when they host the Victoria Royals for Hat-Trick Wednesday. Purchase the Hat-Trick Wednesday deal from Select Your Tickets before 2:00pm on game day to receive a pop, a hotdog and your ticket for $19.99 plus fees. Tickets are on sale at selectyourtickets.com, at the Prospera Place box office or by phone at 250-762-5050

Come skate with the Rockets tomorrow on their ice at Prospera Place tomorrow morning from 11:30 am to 1:00 pm at the Tim Hortons Family Skate. Admission is a  non-perishable food item for the Kelowna Food Bank.