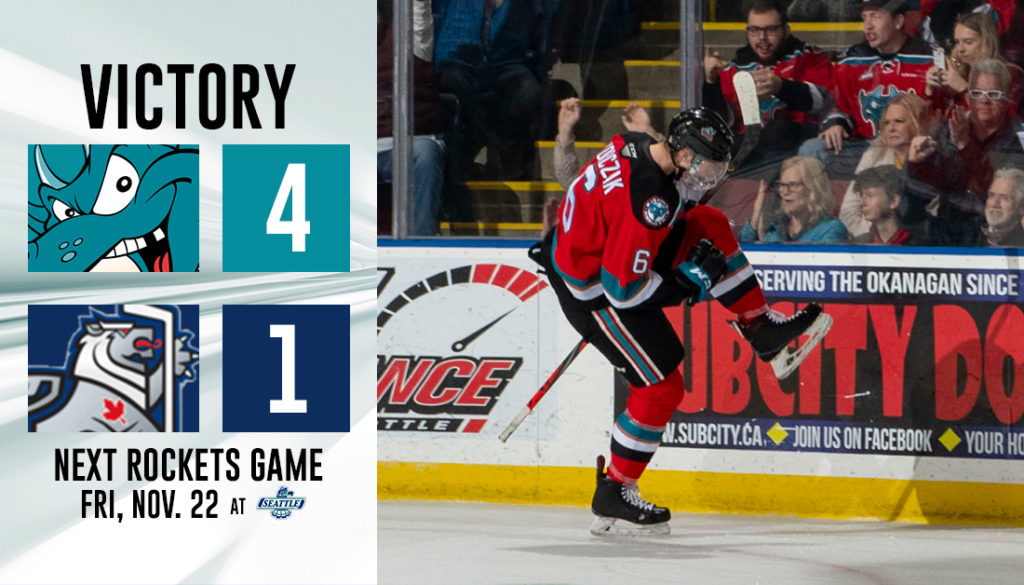 The Kelowna Rockets snapped the Victoria Royals four-game win streak with a 4-1 victory over them Wednesday night at Prospera Place.

Four separate goal scorers lit the lamp for the Rockets, with three of them finding the score sheet during the second period.

Vegas Golden Knights prospect,  Kaedan Korczak (3) opened the scoring late in the first period when he beat Brock Gould with a laser.

Defenceman Jake Lee (2) extended the Rockets lead to two just 1:40 into the second when he snuck up and scored a wrap-around goal. Alex Swetlikoff (7) stayed hot with his third goal in as many games. Korczak picked up his second point of the night with an assist on Michael Farren’s (3) goal late in the frame to create a four-goal cushion.

In addition to goals, @JakeLee03409003 will also wrap your Christmas presents. 🎁🎄 pic.twitter.com/xYa2UjgwKr

During the third period, Sean Gulka (6) crashed into the Kelowna net with Rockets defenders hot on his heel. After reviewing the play the referees deemed it a good goal cutting into the Rockets lead 4-1.

The 🐟 bowl didn't impact @Korczak21's game. The @Trufrozen first star had a 🚨 and an 🍏 tonight. pic.twitter.com/nGAtdFEXRn

Kelowna will now head to south to face the Thunderbirds Friday night at the accesso ShoWare Center in Kent, WA.