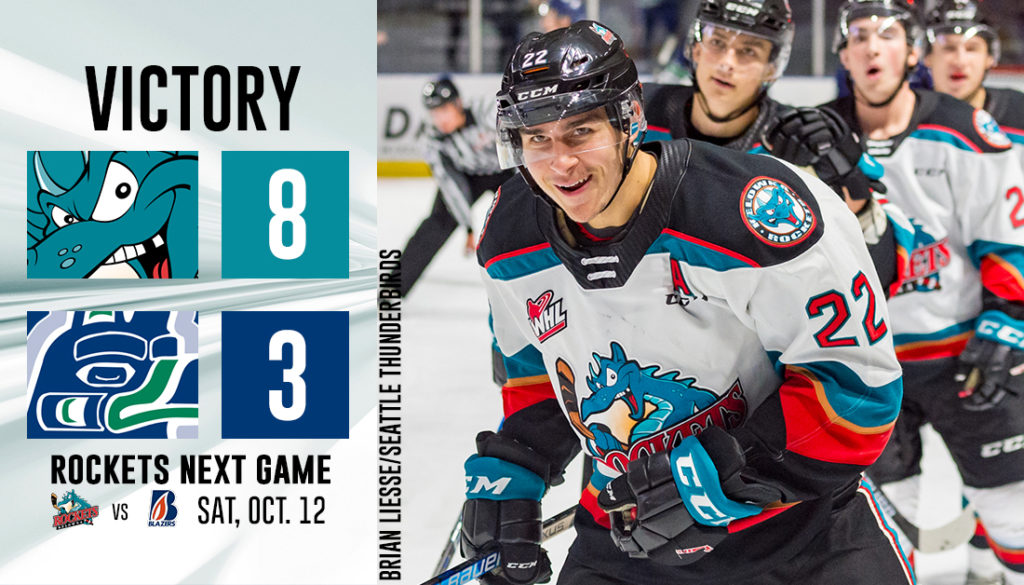 Please note: We’re waiting on Seattle for highlights to share them with you

The Kelowna Rockets came back to down the Seattle Thunderbirds 8-3 Friday night at the accesso ShoWare Center in Kent, WA.

During the second period, the Thunderbirds went up 2-0 on another power-play goal, this time from Simon Kubicek (1). The momentum shifted after the media timeout and the Rockets exploded to take the lead. Nolan Foote (3) cut Seattle’s lead in half with a power-play tally. Foote (4) tied the game up with his second of the game 1:14 later. Twenty seconds later, Alex Swetlikoff (2) pulled the Rockets in front of Seattle for the first time. Pavel Novak (4) extended the Rockets lead by two when he was able to fend off the Seattle defender on a partial breakaway. The Rockets headed into the second intermission up 4-2.

Seattle’s Keltie Jeri-Leon (3) brought the Thunderbirds back within one 7:21 into the third period. Less than a minute later the T-Birds appeared to tie the game up, but the goal was waved off by the referees due to goaltender interference. Just over a minute later Kaedan Korczak (2) reestablished the Rockets two-goal lead. Dillon Hamaliuk (5), Mark Liwiski (1) and Michael Farren (1) also all found the back of the net.

Come cheer on the Rockets tomorrow night as they take on Kamloops Blazers at 7:05 pm. Fans are invited to dress up for the Hershey Candy Scramble game. During the second intermission kids 12 and under will be invited onto the ice to collect candy that will be scattered across the ice surface.  Tickets are on sale at selectyourtickets.com, at the Prospera Place box office or by phone at 250-762-5050