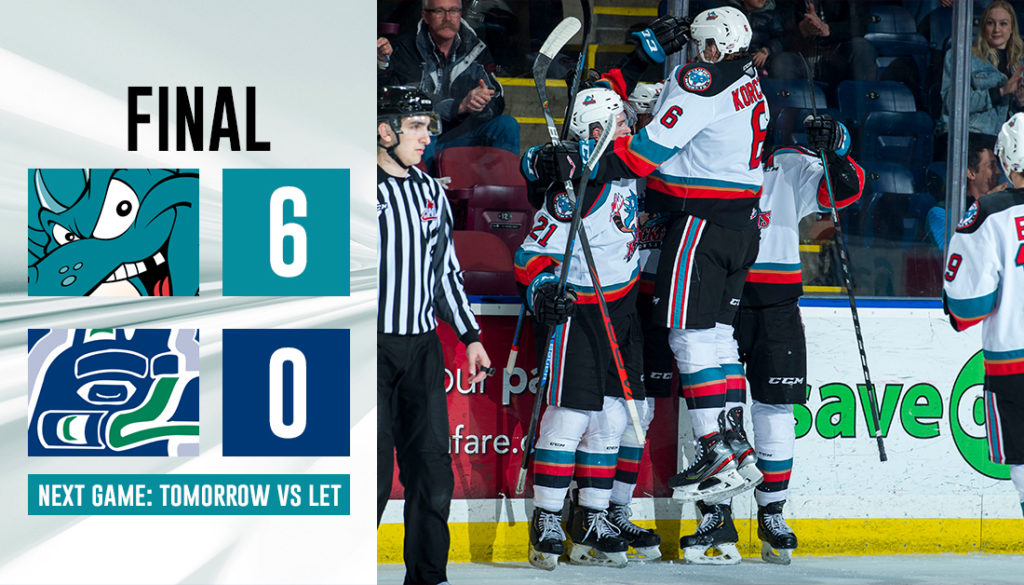 The Kelowna Rockets punched their ticket to the WHL playoffs with a 6-0 win over the Seattle Thunderbirds on Friday night at Prospera Place.

Roman Basran turned aside 19 shots to pick up his second shutout of the season and lift Kelowna to its 28th victory of the season.

Head coach Kris Mallette said that he told his players congratulations after the game, but that clinching a playoff spot is just the start.

“We’re still not done, it’s one step in the right direction. Some of the guys were here last season obviously didn’t get to see that. Playoffs, it’s a different beast, so anytime you can make them is a great feat for our players.”

Matthew Wedman (20) hit the 20 goal mark on the season with a sharp-angled shot that found the back of the net 4:34 into the game. Ethan Ernst (5) picked off the top left corner to create a two-goal cushion.

Early in the second period Pavel Novak (23) fired home a one-timer on the power-play to maintain his point-per-game average. Devin Steffler (1) scored his first Western Hockey League goal after his shot went off of a T-Birds skate and in. Less than two minutes later, Alex Swetlikoff (13) pushed the Rockets to a five-goal lead. Blake Lyda replaced Roddy Ross in net for Seattle after Swetlikoff’s goal.

Novak (24) scored his second of the game just over five minutes into the third period.

The Rockets penalty kill was perfect on the night, shutting down the Thunderbirds twice. Kelowna’s power play went one-for-four on the night.

The Rockets will host the Buffalo Sabres prospect Dylan Cozens and the Lethbridge Hurricanes tomorrow night at Prospera Place. Tickets are on sale at selectyourtickets.com, at the Prospera Place box office or by phone at 250-762-5050.