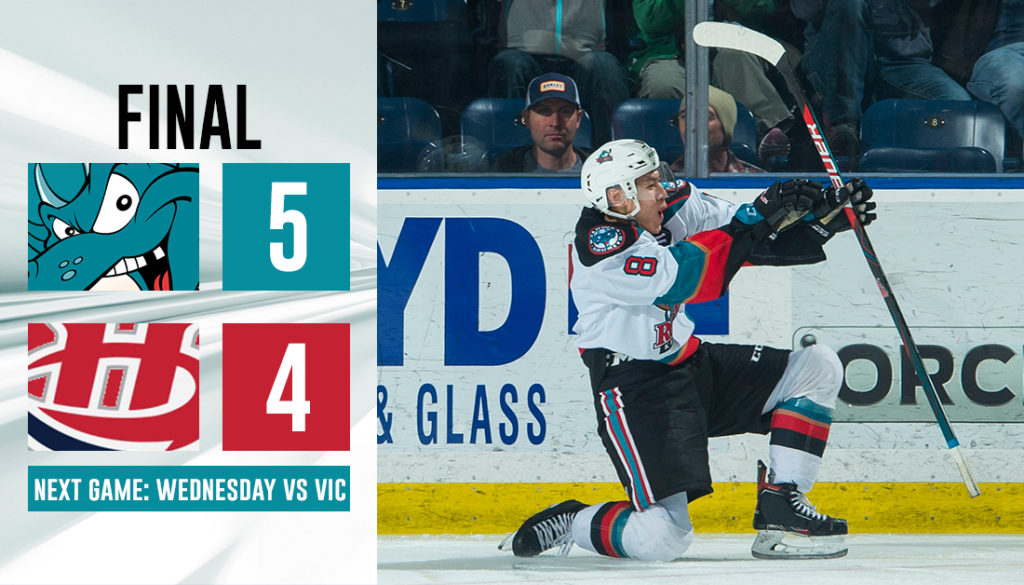 The Kelowna Rockets held off the Lethbridge Hurricanes to skate away with 5-4 victory on Saturday night at Prospera Place.

Kelowna held a 5-1 lead heading into the final period, but Lethbridge pushed back with three quick goals to make it a one-goal game just after the midway point of the third.

Ty Nash (6) opened the scoring for Lethbridge 3:32 into the game. The Rockets rallied off three straight goals to take the lead by the end of the opening period. Trevor Wong (6), Matthew Wedman (21) and Pavel Novak (25) all found the back of the net for Kelowna.

Kyle Topping (12) and Matthew Wedman (22) pushed the Rockets out to a 5-1 lead during the second period.

Bryan Thomson replaced Carl Tetachuk in net for Lethbridge at the start of the third.  Alex Cotton (20) scored and Dylan Cozens chipped in a pair of goals in the span of 2:23 to pull within one of the Rockets.

Roman Basran made 39 saves to pick up his 22nd win of the season. The Hurricanes outshot the Rockets 39-25.

Kelowna shut down all five of Lethbridge’s power play chances, while the Rockets went two-for-three with the man advantage.

Kelowna will be back in action on Wednesday when they host the Victoria Royals for Hat-Trick Wednesday. Purchase the Hat-Trick deal before 2:00 p.m. on game day to receive a pop and hot dog with your ticket for $19.99 (plus taxes and fees). Tickets are on sale at selectyourtickets.com, at the Prospera Place box office or by phone at 250-762-5050.