Rocket Recap: Royals down Rockets in the shootout 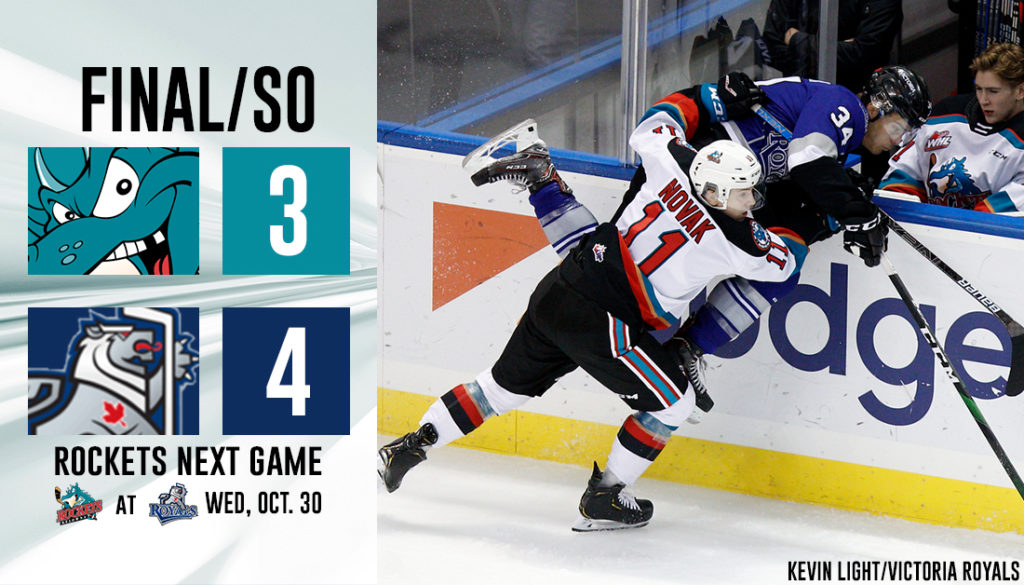 The Kelowna Rockets fell the Victoria Royals 4-3 in a shootout Tuesday night at the Save-On-Foods Memorial Arena in Victoria, B.C.

The Royals came back from a two-goal deficit early in the third period to force extra time.

Gary Haden (2) put the Royals in front first when took off on a breakaway after a Rockets defenceman became tied up with a linesman.  Just before the end of the opening period, Pavel Novak (6) deflected a shot between his legs to tie up the game.

Sean Comrie (2) gave the Rockets their first lead of the game 3:12 into the second period, Elias Carmichael picked up his first WHL point with an assist on the go-ahead goal.  Just over four minutes later, Ernst (1) cashed in on the odd-man rush to extend the Rockets lead. Shane Farkas then replaced Brock Gould in net for the Royals.

.@ethanernst11 has ✌️ points on the night now after this gorgeous snipe. pic.twitter.com/LAb9BTJfQx

A shootout was needed to determine a winner. Topping and Haden were both unsuccessful in the first round. Foote missed in the second round, but Haden was successful for the Royals. Needing a goal to continue, Leif Mattson was denied.

Kelowna will face the Royals again tomorrow night at the Save-On-Foods Memorial Centre, puck drop is set for 7:05 pm.