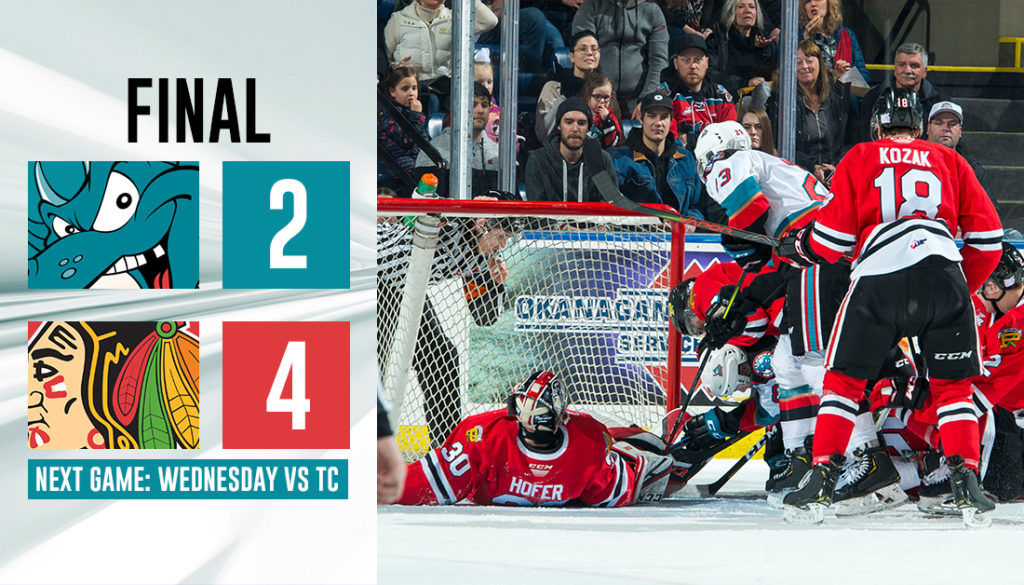 The Kelowna Rockets fell 4-2 to the Portland Winterhawks on Saturday night at Prospera Place.

Roman Basran returned to the net for the Rockets after being pulled the night before, the 18-year-old stopped 32 of the 35 shots he faced.

“I just play every game the same,” said Basran when asked how he bounced back from last night. “Same mentality, same way. Don’t do anything different, cause once you do anything different there’s no point of changing.” You can watch Basran’s postgame availability here.

The Rockets outshot the top team in the WHL 38-36, putting up 17 shots alone in the scoreless opening period.

“We had a better start and didn’t take as many penalties tonight,” said head coach Adam Foote. “It was good, we had a good effort against a good team, a fast team and we didn’t stop. There was a lot of positives that came out of that game.” You can watch Foote’s postgame availability here.

Cross Hanas (17) and Seth Jarvis (29) found the back of the net to give Portland a 2-0 lead just over five minutes into the second period. Kyle Topping (7) cut the lead in half with a pass attempt that went off of a Winterhawk defender and into the net. Seth Jarvis (30) restored the two-goal lead 1:20 after Topping’s tally.

Reece Newkirk (25) cashed in an empty-net goal with 2:43 left in the game. Topping (8) scored his second of the game in the dying seconds of the third period.

“I think we played more solid minutes,” said Topping following the game. “We continued what we did yesterday that worked. We had a lot of good shifts and hemmed them in and made them work.” You can watch Topping’s postgame here.

Kelowna will be back in action on Wednesday when they host the Tri-City Americans for Hat-Trick Wednesday at Prospera Place. Purchase the Hat-Trick deal before 2:00 p.m. on game day to enjoy a pop and hot dog with your ticket for $19.99 (plus taxes and fees). Tickets are on sale at selectyourtickets.com, at the Prospera Place box office or by phone at 250-762-5050.