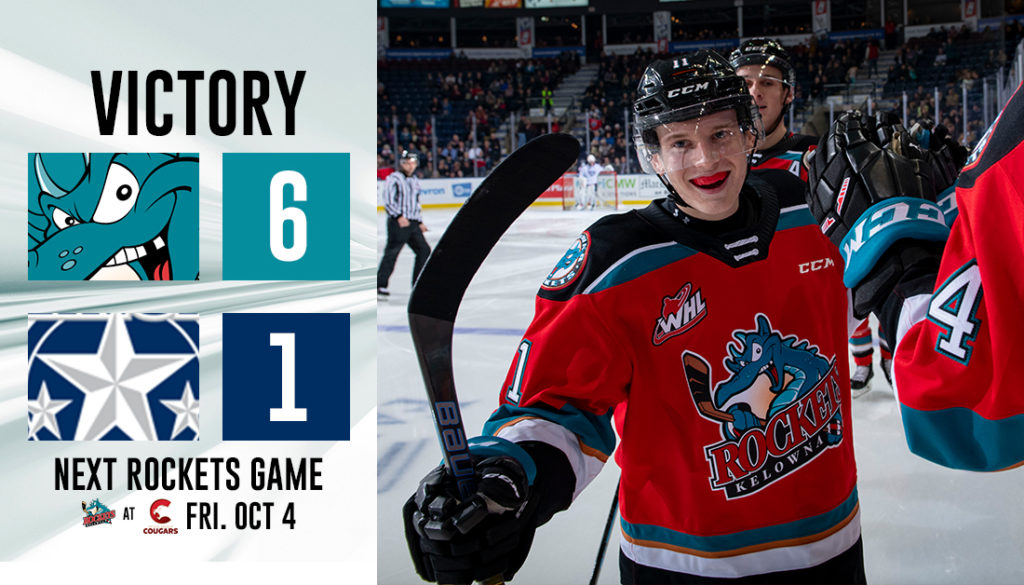 The Kelowna Rockets toppled the Tri-City Americans 6-1 on Wednesday night at Prospera Place in Kelowna, BC.

Nolan Foote lead the way for the Rockets with four points on the night while Pavel Novak wasn’t far behind with three.

The Rockets offence came alive in the second period. Novak (1) opened the scoring 30 seconds into the second period while on the power play with his first Western Hockey League goal. Alex Swetlikoff (1) increased the Rockets lead at 7:40 with his first goal of the season.  Liam Kindree‘s (2) made it 3-0 while standing in front of the net.  Edge Lambert (1) and the Americans cut into the Rockets lead at 16:06.

Kelowna kept it going in the third period. Foote (1) netted his first goal of the season to restore the Rockets three-goal lead at 3:29.  The Rockets power play was successful for the second time on the night when Dillon Hamaliuk (4) capitalized. Kyle Topping (4) made it 6-1 with just over six minutes to play.

Pavel Novak have yourself a night! pic.twitter.com/9DU5TebUrH

Roman Basran turned aside 19 of the 20 shots while on the way to picking up his third victory of the season. Kelowna outshot the Ams 42-20.

The Rockets and Americans will meet again on Saturday, November 23  at the Toyota Center in Kennewick, WA.

Kelowna is on the road this weekend for a pair of games against the Prince Geroge Cougars. They’ll face the Cougars at 7:00pm on Friday and Saturday at the CN Centre. Catch all of the action on AM 1150 or WHL Live.