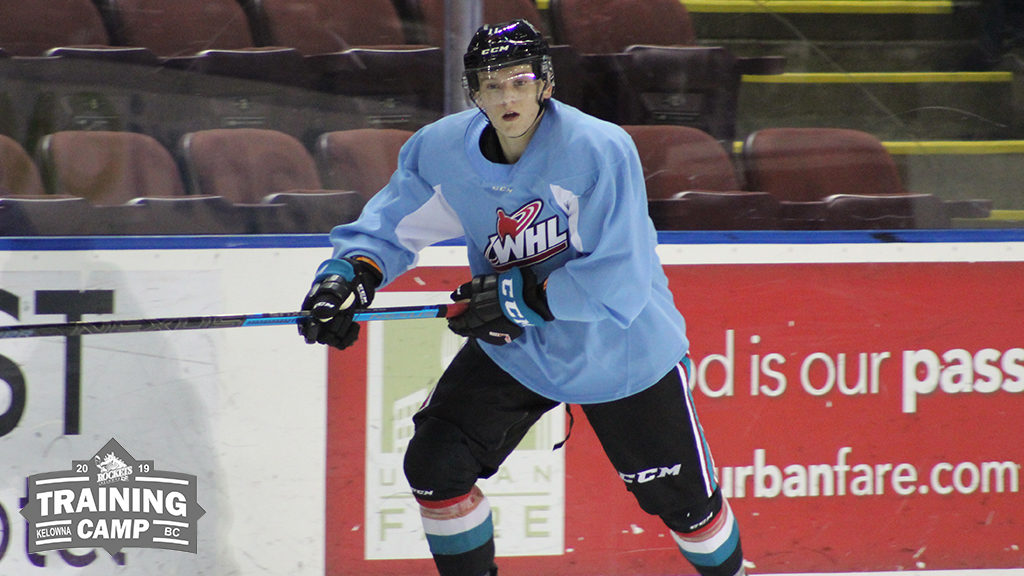 The Kelowna Rockets 2019 training camp wrapped up today, the Rockets are now gearing up for preseason action.

This is head coach Adam Foote’s first training camp as the coach of the Rockets, he says that the week has been good for everyone.

“It has been a good camp,” said Foote. “Everyone is learning a lot, and I’ve had the chance to get to know our prospects and spend time with them. I think the future is very bright for the team moving forward, we have a lot of solid prospects coming along. When it comes to veteran players they’ve all made strides throughout the summer to continue getting better.”

He says that a couple of picks from the 2019 Bantam Draft have caught his attention.

“There has been a lot of standouts at camp for me. There a lot of smart hockey players here, but a couple of young guys that have really stood out to me are Nolan Flamand and Rilan Kovacevic. They seem like they have some chemistry as well.”

Foote has liked what he has seen so far on the back end from both veterans and prospects.

“Jake Lee and Sean Comrie have looked very solid, they’re calm guys out there. Devin Steffler put in a lot of work over the summer in the gym and on the ice, it has really shown this week. Our younger d coming up have also looked great out there, this camp will help them grow into the players that they strive to be.”

Cayde Augustine also made strides this summer, he was 235 pounds at the end of last season and returned for camp weighing in at 205 pounds.

Newly signed import player Pavel Novak skated with the team for the first time Thursday morning. The Rockets drafted Novak with the 13th overall pick at the 2019 CHL Import Draft on June 27.

The Rockets will open their preseason tomorrow night against the Victoria Royals at Prospera Place. Tickets are on sale at selectyourtickets.com, at the Prospera Place box office or by phone at 250-762-5050.