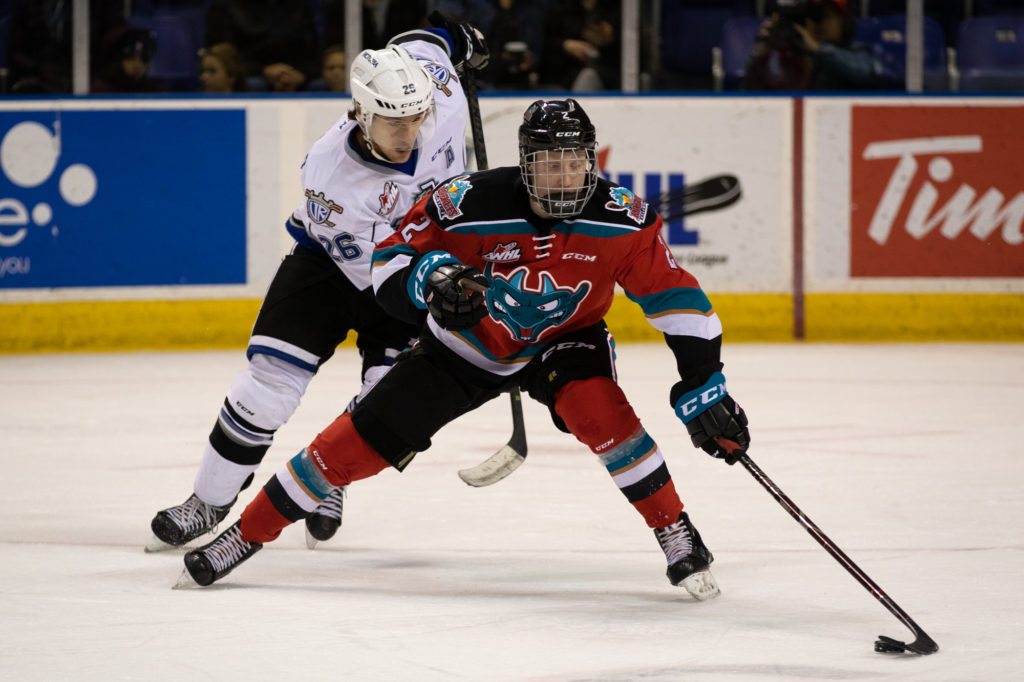 The Victoria Royals split the two-game series with the Rockets Monday, downing the Rockets 6-2 at the Save-On-Foods Memorial Centre in Victoria, B.C.

Liam Kindree returned to the Rockets lineup after missing the last nine games due to injury.

Victoria jumped out to an early lead, just 44 seconds into the game. Lassi Thomson turned over the puck near the Rockets net, Logan Doust (5) jammed the puck past Roman Basran. The referees would take a look, but ultimately deemed it a good goal. Kaid Oliver (26) extended the Royals lead at 4:31 when the Rockets turned the puck over to him. Following that goal, James Porter came off the bench in relief of Basran. Devin Steffler headed to the box, sending the Rockets to the penalty kill for the first time. While on the man advantage, Oliver (27) made it a 3-0 game tipping the puck in past Porter at 7:52. The Royals held a 3-0 lead after the first period of play.

With Nolan Foote in the penalty box to start out the second period, the Royals took advantage. Phillip Schultz (14) snapped a shot from right in front of the Rockets net past Porter 23 seconds into the period. Tarun Fizer (12) made it 5-0 for Victoria at 5:21. Schael Higson launched a bomb at the Royals net, it went off Leif Mattson (20) past Griffen Outhouse and into the net.  While on the power play Nolan Foote (29) shot the puck off towards the net, it went off the post and sat in the blue paint behind Outhouse, Foote put it into the net to make it a 5-2 game. After forty minutes, Victoria was up 5-2.

Basran stopped three of the five shots he faced before being replaced. Porter turned aside 32 of the 36 shots fired on him, his record moves to 7-13-2-1. The Royals outshot the Rockets 41-39.

Kelowna now heads to Spokane to play the Chiefs on Friday night.

The Rockets will return to home next Saturday to host the Kamloops Blazers on Saturday, February 23rd. Tickets are on sale at selectyourtickets.com, at the Prospera Place box office or by phone at 250-762-5050.