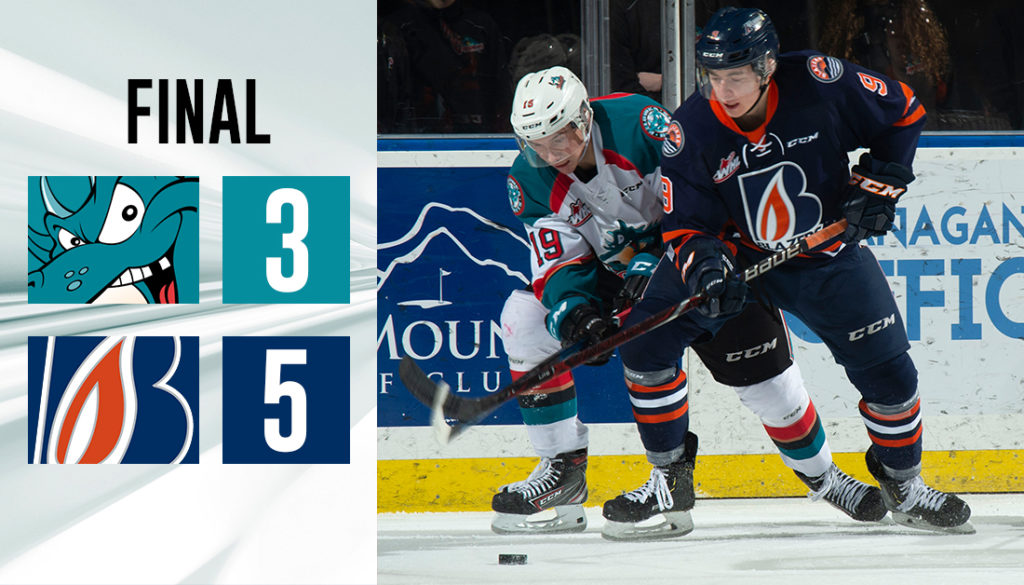 The Kelowna Rockets came back from a three-goal deficit Sunday afternoon but fell 5-3 to the Kamloops Blazers at the Sandman Centre in Kamloops, B.C.

Import player Pavel Novak made his North American debut with the Rockets, picking up an assist on the Rockets first goal.

The Blazers opened the scoring 5:21 into the game when Connor Zary (1) beat Rockets goaltender James Porter. Kamloops added to their lead 33 seconds later when Kyrell Sopotyk (1) made it 2-0. Josh Pillar (1) made it a three-goal lead with just over five minutes to go in the opening frame.

Kelowna stormed back in the opening minutes of the second period. Defencemen Cayde Augustine (1) got the Rockets on the board, Alex Swetlikoff (1) made it a one-goal game and Liam Kindree (1) tied it up. Roman Basran replaced Porter in net for the Rockets just past the midway point of the game. Tye Spencer (2) established the Blazers lead with 60 seconds to play in the period.

The two teams exchanged chances throughout the period, but the Rockets could not pull in front. Reese Belton (1) added the insurance goal for the Blazers.

The Rockets will head to Langley to face the Everett Silvertips in Vancouver’s tournament Saturday, September 7. Puck drop is set for 3:30pm, you can follow along here or on the Rockets twitter.