THE WESTERN HOCKEY LEAGUE HAS ANNOUNCED ITS RETURN TO PLAY PROTOCOL FOR THE 2020-21 SEASON, CLICK HERE TO LEARN MORE
THE ROCKETS ONLINE STORE AND STORE IN PROSPERA PLACE ARE TEMPORARILY CLOSED
January 19, 2019 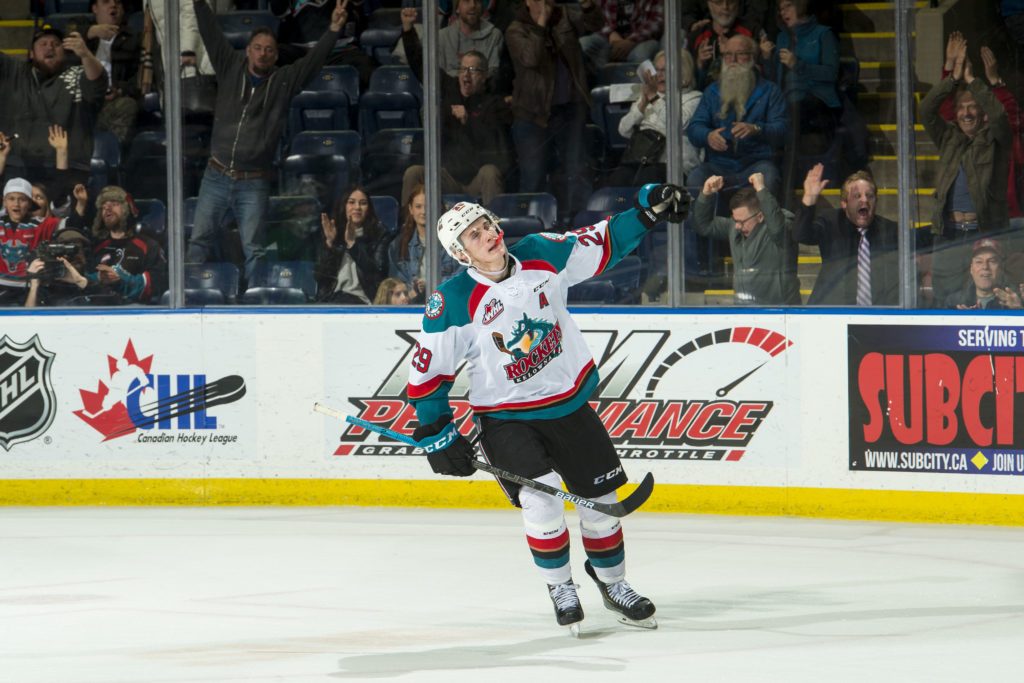 The Kelowna Rockets defeated the Prince Albert Raiders 4-3 in a shootout at Prospera Place on Saturday night.

Aliaksei Protas (9) got the Raiders on the board first when he beat Rockets starter Roman Basran 4:51 into the game. The goal was reviewed by the referees, but was ultimately deemed a good goal.  Kelowna’s Kyle Topping (17) tied the game at 12:36. Nolan Foote (22) gave the Rockets their first lead of the night firing a laser past Raiders netminder, Ian Scott at 16:03. The Rockets held a 2-1 lead after twenty minutes of play.

Nolan Foote's (@foote_nolan) bucket goes flying, but he finds the back of the net! 🚀
🍎 @Mattson_19
🍏 @lassithomson pic.twitter.com/sEMv7LSBvX

The Raiders came out strong to start the second, Dante Hannoun (22) tied the game with the lone goal of the period just 1:42 into it.

Parker Kelly (22) put the Raiders up 3-2, 7:52 into the third. Prince Albert’s Noah Gregor was called for tripping at 13:43. While on the power play, Kelowna’s Lassi Thomson (10) launched a rocket past Scott to tie the game and force overtime.

The two went back and forth during overtime, but neither could score the game winner.

Roman Basran turned aside 30 of the 33 shots he faced during regulation and overtime, he also stopped all three shooters in the shootout. His record moves to 13-13-1-0. Prince Albert outshot Kelowna 33-30.

The Rockets now have the week off. Lassi Thomson, Kaedan Korczak and Nolan Foote will all play in the Sherwin-Williams CHL/NHL Top Prospects Game in Red Deer on Wednesday.

Kelowna will return to the ice when they host the Victoria Royals on Friday, January 25th at Prospera Place. Tickets are on sale at selectyourtickets.com, at the Prospera Place box office or by phone at 250-762-5050.