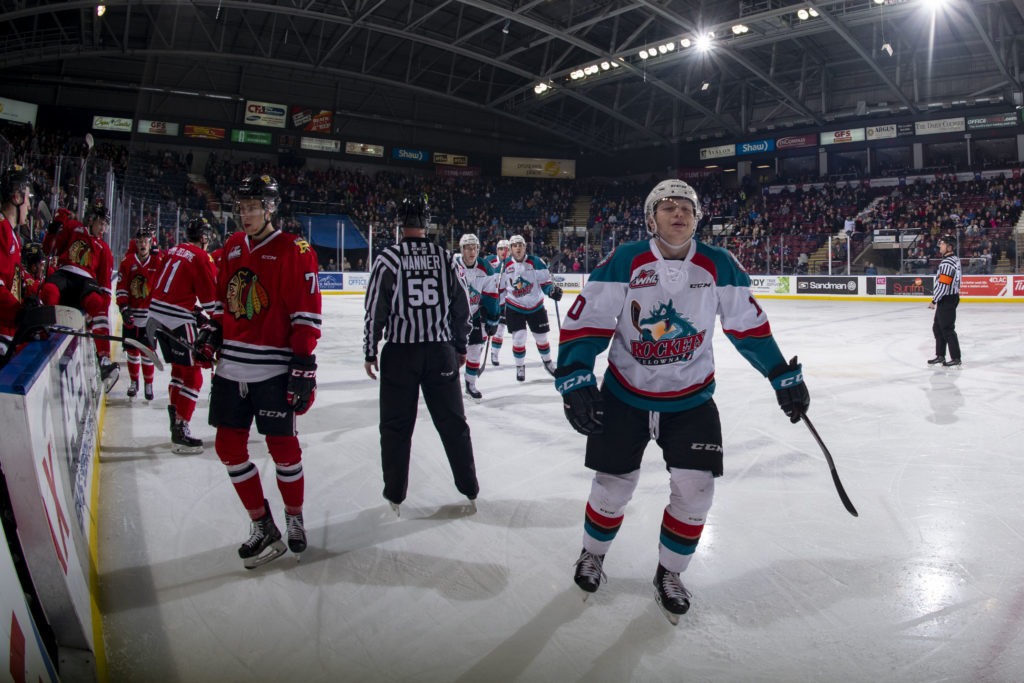 The Kelowna Rockets were able to split their back to back game against the Portland Winterhawks, claiming a 4-3 victory at Prospera Place in Kelowna BC.

Ted Brennan (2) got the night started six minutes into the game when he put a rebound past Winterhawks starter, Shane Farkas. It only took 1:13 later for the Rockets to strike again, Nolan Foote jumped past a defender and found Leif Mattson (22) cross-ice to extend the Rockets lead to 2-0. The entire first period was clean when it came to penalties. Kelowna held a 2-0 lead after twenty minutes of play.

The Winterhawks pulled within one 12:39 into the second period, Josh Paterson (22) deflected a shot past Rockets goaltender Roman Basran. Conner Bruggen-Cate and Lane Gilliss were handed the first penalties of the game, offsetting minors at 14:05. With 15 seconds remaining in those penalties, Kyle Topping was called for tripping. Bruggen-Cate exited the box and took off on a breakaway, but was unable to beat Farkas. Kelowna shut down Portland’s power play chance. The Rockets had their first chance on the man advantage at 17:32, but they were unable to capitalize on the opportunity. Kelowna headed into the second intermission with a 2-1 lead.

The Rockets headed to the power play just 25 seconds into the third period, Portland’s Clay Hanus was called for kneeing. Lassi Thomson (17) reestablished the Rockets two-goal lead on the man advantage, he fired a laser through traffic and into the back of the net. Kyle Topping picked up his 100th WHL career assist on the goal. Mark Liwiski was given five minutes and a game misconduct for boarding at 2:07, while on the ensuing penalty kill Lassi Thomson flipped the puck into the crowd sending him to the box for delay of game. The Rockets killed off the Liwiski penalty, but Jake Gricius (24) was able to pot one while on the power play 7:26 into the period. With Foote sitting in the box for slashing, Brendan De Jong (7) tied the game up at three 14:13 into the third. Fifteen seconds after the tying goal, Dallon Wilton (4) put the Rockets ahead once again.  Kelowna held on for the 4-3 victory.

The Rockets are back in action this Friday when they head to Kamloops to face the Blazers. They’ll return home to host the Blazers on Saturday night for our ‘RE/MAX Presents: WHL Suits Up with Don Cherry to Promote Organ Donation’ game. There will be new Don Cherry bobbled head and specially themed jerseys that will be up for auction. Tickets are on sale at selectyourtickets.com, at the Prospera Place box office or by phone at 250-762-5050.