Rockets fall to Silvertips in Langley

The Kelowna Rockets fell 1-0 to the Everett Silvertips Saturday evening at the Langley Events Centre in Langley, BC.

Many young and fresh faces were in the lineup again for the Rockets as seven players are away at NHL rookie camps/tournaments. Fifteen-year-old John Babcock had the chance to once again suit up again for Kelowna, but this time he was able to play in front of his hometown crowd.

Aidan Sutter (1) opened the scoring when he beat Rockets starter Roman Basran just before the midway point of the opening frame. The Rockets then found themselves in a bit of penalty trouble but were able to stave off the Silvertips. Steel Quiring sat for two minutes for slashing just after the halfway mark, Mark Liwiski and Everett’s Dawson Butt were given offsetting roughing minors, Basran was called for tripping, and Alex Swetlikoff was called for cross-checking just before the end of the first period.  Kelowna entered the first intermission down a goal.

The second period was a clean twenty minutes, there was no scoring or penalties. Cole Tisdale replaced Basran in net for the Rockets.

Just like the period before, there were no infractions or scoring. Sutter’s lone goal would hold up as the game-winner.

Basran stopped 15 of the 16 shots he faced while Tisdale turned aside all nine fired on him. Everett outshot Kelowna 25 – 24.

The Rockets will host the Prince George Cougars tomorrow at Prospera Place. Two dollars from each ticket sold during preseason Rockets home games will go to Cops for Kids. Tickets are on sale at selectyourtickets.com, at the Prospera Place box office or by phone at 250-762-5050. 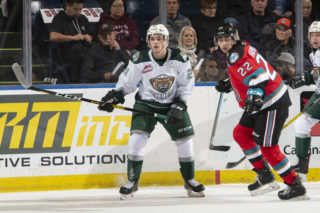